<![CDATA[ <p style="text-align: justify;">Alliance Councillor Patrick Clarke believes the 2015 Irish Open which will be staged in Newcastle from 26-31 May 2015 will promote Newcastle to a major global audience and will be a massive economic and tourism boost for local businesses and the hospitality industry in Newcastle and Down District. 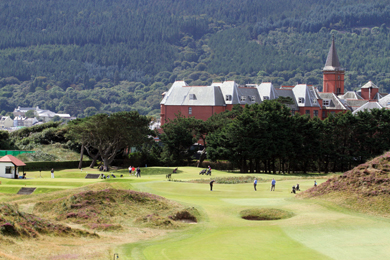 A relaxed scene around the first tee at Royal County Down with the Slieve Donard Hotel and Spa in the background and the Mountains of Mourne.[/caption]

“Next year will see Newcastle host the 2015 Irish Open with the European golfing event been played at the world famous links course at the Royal County Down golf club. As a Newcastle Councillor I believe the publicity, media coverage and global PR exposure for Newcastle, Down and Mourne will be absolutely enormous. “The 2015 Irish Open will give this part of County Down a major tourism and economic boost and I am more than confident that the many local businesses in Newcastle and surrounding areas particularly in the hospitality sector will be gearing up for this major event long before May 2015.

“This is a very unique opportunity for all businesses in Newcastle to fully embrace the Irish Open 2015 and to benefit from the increased visitors and footfall who will be shopping, staying in accommodation and enjoying the hospitality and night-time economy.

“Down District Council officers across the various departments are already planning ahead for this major European sporting golf event coming to Newcastle and will be over the coming months meeting and working with all key stakeholders involved with the 2015 Irish Open coming to Newcastle.”

“With Down District Council having successfully planned and organised in previous years the Festival of Flight festival which had attendances of over 100,000 visitors coming to Newcastle, the 2015 Irish Open will be an immeasurable opportunity to now even showcase Newcastle and Down District further as a tourism product on the international stage to a huge global audience.”