Not the Romans this time, but a trio of African runners, in the country as part of the Project Africa Athletics Partnership and who, fresh from their participation in Saturday’s International Cross Country at Greenmount, came to the County Down town of Downpatrick on Sunday to display their talents to the appreciative audience of spectators enjoying the 17th running of Jimmy’s Ten Road Race writes Joe Quinn. 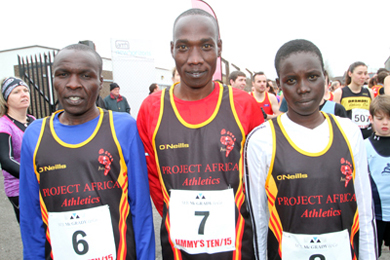 RESPECT for JIMMY’S MUM A minute’s silence was called for prior to the start of the race in honour of the late Jimmy Murray’s mother, Maura Murray,  who died recently, and East Down would like to thank everyone for the dignified and respectful manner in which it was observed.

THE RACE At the head of affairs from the gun, fired by Down District Council Chairman Councillor Billy Walker, the Kenyan Gideon Kimosop who was 4th in Saturday’s race and Ugandan Vincent Kirotich dominated the race, flying through halfway in15.24 with 6 times previous winner Joe McAlister and East Down’s top runner Brendan Teer fighting for third place but already over half a minute down on the leaders.

Kimosop, however, was determined that he would not be beaten in a sprint finish for the second time in as many days, having been pipped for third place in Antrim 24-hours earlier and sprinted away down Market Street to secure victory in 30:34 five seconds ahead of fellow Project Africa athlete Vincent Kiprotich who clocked 30:39. In the battle for the final podium place, McAlister got the better of the gallant Teer to take third place in 32:07.

LADIES EXCITING BATTLE In the ladies event, the young Kenyan athlete and another competitor at yesterday’sInternational XC, Selinah Kangogo, was in total control. By half way, the speedy athlete had just over seventy seconds of a lead over Rebecca Murtagh (Dromore AC), Denise Logue (Ballydrain Harriers) and Catherine O’Connor (East Down AC) who were all in the same group, with Louise Smith (North Belfast Harriers) just behind. 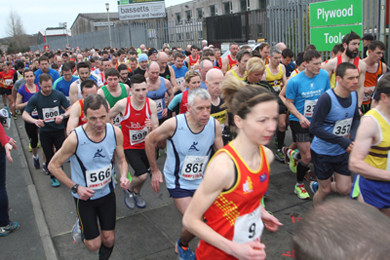 Runners stream on to the Ballydugan Road from the start line.[/caption]

In the end Kangogo sealed a comfortable victory recording 36:13, though well outside the race record record 34.17. The real excitement was taking place behind the victorious Kenyan, with the leading trio Murtagh, Logue and O’Connor now beginning to split. Murtagh looked controlled as she moved clear of the others and whilst Denise and Catherine tried to hold onto the Dromore AC athlete, the wily and always dangerous North Belfast Harrier Louise Smith was mounting a challenge from the rear and made up the halfway 10 second deficit to catch caught the pair of them, eventually finishing in third spot just 12 seconds behind Rebecca Murtagh 38:01.

Rebecca was third last year and found only the unknown Kenyan too good for her this time. Bearing in mind that Louise had taken part in the Greenmount race the day before and that she is now in the Over-40 category, this too was some performance. Just 3 seconds behind came Ballydrain Harriers’ Denise Logue whose efforts earned her the first over 35 prize. Unlucky loser in all this activity was East Down;s Catherine O’Connor who nevertheless could be very pleased with her performance 38.31 having had her preparations hampered by asthmatic attacks.

CLASS OF 92? East Down is grateful for the support it receives every year from local clubs and from those across the country and is delighted that even with many competing races on the same day or around the same weekend that so many continue to take part in Jimmy’s Ten. Newcastle AC, Murlough AC, North Down, North Belfast Harriers, Newry City, Willowfield and Seapark to name but a few are always strongly represented but pride of place surely has to go to the inspirationally resurgent Ballydrain Harriers who fielded an incredible 92 runners this year!! May they continue to flourish.

CATEGORY WINNERS The first under 20 runner to cross the line was East Down’s James Smyth who posted a superb 39.3 in his first ever 10K and shows every sign of being a force in these longer distance events in the years ahead. First Junior Lady was also from the local club Laura Gardiner 43.41 as she too steps out of the junior ranks to mix it with the grown ups.

Over-35 category winner was Barrie Atkinson 34.15, a fine run from him as he tunes up for the London Marathon next month.

The next 3 Male categories Over 40, 45 and 50 were all won by North Belfast athletes, Greg Lavery, Eamon White and Martin Cox respectively while their Ladies claimed the Over-45 and 50 titles through Penny Lindsay and Ita McCambridge, with the Over-40 award going to Diane Watson, City of Lisburn. Norman Mawhinney, Ballydrain and Patricia Brown, Newry City took the Over-55 prizes with Maura King lifting the Ladies Over-60 money.  Newry City scored again through Pat Rocks in the Over-60’s and Terry Eakin North Down and George Morrow Jog Lisburn were first in the Over 65 and Over 70 categories respectively.

EAST DOWN PERFORMANCES There were many fine performances by East Down athletes, some pbs and perhaps a few disappointments but well done to all. Tracey McDowell found out last year and Tom McClean this it is not easy being involved in all the preparations and going out and hitting the target on the day, even though it is home territory where everyone wants to give of their best.

So just be happy to have ran, you’re time will come in some other club’s event where you have no pressure or stress from the lead up and can relax and enjoy. Notable, however, was Andrew Telford’s amazing 37.3,3, Mick McCreesh’s first ever sub-40, a mind blowing achievement 39.58, a target unthinkable a year ago, and Paul Burns, Dee Murray and Denis McKay’s impeccable pacing of 39.59, 44,57 and 59.52 of the sub 40, 45 and 60 minute groups respectively.

THANKS A huge vote of thanks is extended to everyone who helped towards the success of the day, with a special Well Done to the members who helped with the pre-race registration and the band of members and friends who worked so hard at the post race refreshments. Not only did the race have a new starting point but following the opening last weekend of its new clubrooms, East Down was delighted to hold the post race refreshments and prizegiving ceremonies in the new premises too.

The fare on offer on Sunday ensured that Jimmy’s Ten retains its standing as the provider of best post-race refreshments anywhere. Thanks too to everyone who helped set up and dismantle the route signage and moved barriers and cones into and out of position as necessary and to all the volunteer marshals and to the PSNI personnel who ensured safe passage around the route.

MORE THANKS Thanks are also extended to Down District Council Chairman Billy Walker for his attendance at the start and afterwards at the prize giving ceremony, to principal sponsor MB McGrady & Co, Chartered Accountants, the other event sponsors, Down District Council, Dupes DVD and Video Duplication, Translink, Plus2Print, Wrap and Roll Stoneyways, Denvirs Hotel, Flowers by Tracey, Murphy’s Bar and Restaurant, Stoneyways Ltd and Swift Fuels. A special word of thanks ALSO to Athletics NI President Gary Keenan who attended the venue for the second week in a row and who has promised that he will be back next year as a participant.

JUNIOR RACES The day kicked off with the Junior Jimmy’s races around the ASDA Car park, and courtesy of McDonald’s every participant received a bottle of water, a fruit pack and a medal.

THE AFRICANS ARE COMING BACK!! Negotiations are currently under way to invite the 3 Kenyans back to Downpatrick, probably on Thursday 26 March in the Clubrooms to host an Endurance Running Workshop which will be open to all aspiring runners and members of all athletics clubs. If any of you have viewed the interview conducted with the race winner Gideon Kimosop and available on the East Down website you will know it will be a fascinating evening, covering training methods, nutrition and lifestyle. Details will be published on: www.eastdownac.co.uk when confirmed – but don’t miss it.