<![CDATA[ <p style="text-align: justify;">THE Decadent Theatre Company’s performance of ‘A Skull in Connemara‘ in Armagh’s Market Place Theatre on Thursday 6 March was nothing less than brilliant. And you will have an opportunity to see the play in action in the Lyric Theatre, Belfast, between Tuesday-Sunday 11-16 March 2014. 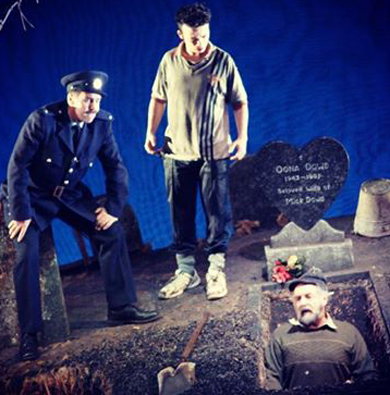 The cemetery scene in A Skull in Connemara.[/caption]

Playing to a packed house on tour, the four of a cast expertly directed by Andrew Flynn gave a masterly performance centred around  the macabre subject of disintering the bones of the dead, a yearly week long task for the gravedigger Mick Dowd played by Garret Keogh. The pacey plot certainly takes a twist when it transpires that he has to dig up the bones of his late wife who died in a car crash seven years previous – or was she murdered by the gravedigger himself?

The performance was word-perfect, flowed smoothly, gripping the audience from the beginning in a West of Ireland whodunnit. The Boston Herald has described playwright Martin McDonagh as as “The Quentin Tarantino of the stage”. There is definitely something bizarre about a man digging into his wife’s grave to fetch and powder her bones!

Acclaimed writer Martin McDonagh was nominated for an Olivier Award in 1996. He also wrote the BAFTA winning ‘In Bruges’ and and ‘Seven Psychpaths’. ‘A Skull in Connemara’ is certainly one of his wittiest pieces from simple plain banter to deep irony.

But the plot thickens when he open his wife’s grave and in a climactic moment at the end of the first act, discovers her remains are gone. The most poignant scene was when Mick and his helper Mairtín  (Jarleth Tivnan) are drunk after disintering bones and  pulverise three skulls on his kitchen table under the influence of poteen.

There is much drunkenness through the scenes with the poteen-swigging cast, Garda Thomas Hanlon being the only sober one, trying to piece the case together and pin a murder on Mick who parades the stage with his hammer. It is when young Mairtín crashes Mick’s car that you just think Mick was a murderer and Mairtín steps back into the kitchen covered in blood raising the bar in the comic effect.  The action veers off in a different direction. In a twist in the tail the finger for the removal of Mick’s wife’s body points to Garda Thomas. 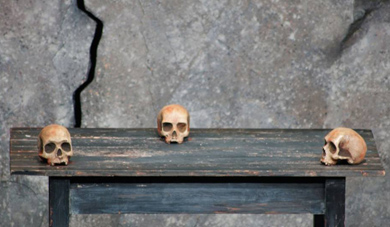 All in a days work for a gravedigger from Connemara.[/caption]

There is much hard-hitting Irish banter and humour through the play such as Mairtín referring to the tour guide in ‘The Quiet Man’ country selling the free tourist brochures to the ‘yanks’. Interestingly there is a tension between Mick and the other three characters at different levels which adds a distinctive energy of personal animosity to the play, a statement about lack of trust in human relationships.  Mick seems to tolerate Mary Johnny who bores him with “weather reports” and she admits in the end she had only been visiting to get a drink of Mick’s poteen

There is no doubt that the splendidly executed set change at the end of act one moving from the kitchen scene to the cemetery is one of the most dramatic I’ve seen. Especially for the audience in the front row!  The set itself was impressively designed by Owen MacCarthaigh who was nominated for a 2013 Irish Times Theatre Award for best Set design for this production.

As the play ends, it darkens and literally comes down to earth. We see Mick kneeling at the kitchen table caressing his wife’s skull in a moment of personal loneliness, deep affection, tenderness and  remorse against the backcloth of the action of the play  touching on themes of deep human resentment in this West  of Ireland rural society that have unfolded through the play.

This performance will definitely make you wince in your seat at the irreverant scenes and themes… you will laugh at the earthy humour, and just ponder over your own transient mortality at the darker moments.

‘A Skull in Connemara‘ runs in the Lyric Theatre Belfast from Tuesday to Sunday 11-16 March.

Don’t miss it! You may never rest in your grave peacefully for eternity if you do!