<![CDATA[ <p style="text-align: justify;">Schools across County Down were celebrating their A Level and AS results last week with most schools excelling is some way, some with 100% pass rates, it certainly looks like education is providing a path forward in creating bright new futures for many young people.

Down High School Students Celebrate Another Year of High Achievement 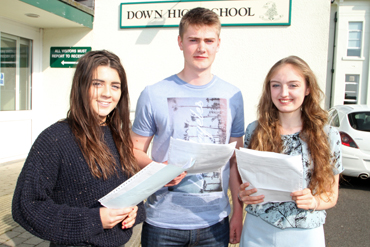 Celebrating were Rebecca Guiney, Mark Hanna and Georgina Majury. They were top students with five A* grades at the Down High School.[/caption]

Down High School Headteacher Mr Paul Logan has hailed the efforts of pupils, staff and parents as the school celebrates another very good year of A-Level results.

He said: “The recently-expanded Sixth Form has meant record numbers of students sitting a range of traditional A-level subjects, Applied A-Levels and BTEC courses. As well as a number of pupils achieving three A* grades each, and Andrew Irvine gained a hugely impressive four A* grades.

“The top performances were from Georgina Majury, Mark Hanna and Rebecca Guiney who each attained the quite remarkable feat of five A* grades. Georgina will read Mathematics and Physics at Cambridge University, Rebecca plans to study Mathematics and Geography at Trinity College, Dublin, while Mark will pursue a degree in Medicine at the University of Oxford.” 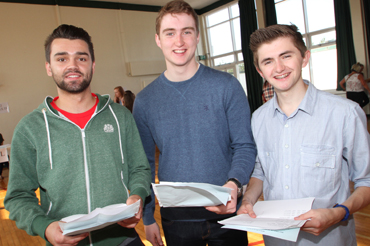 ON their way to university: Just checking their A Level results at the Down High School were Reuben Black, Peter Morrison and Matthew Lennon.[/caption]

The recently-introduced BTEC Level 3 Subsidiary Diplomas have enabled many students to access a range of university courses. These subjects, delivered in partnership with the South Eastern Regional College (SERC), have proved very successful, with over 80% of pupils achieving the top Distinction* grade.

Mr Logan expressed his “great satisfaction” at the so many strong examination and assessment performances of the students. and added: “At Down High School, we have endeavoured to expand our curriculum in ways to bring out the best qualities of our young people. The performances of our students, including the large number who joined us for Sixth Form study, have been highly impressive and I would like to express my admiration for the work that they have put into making these results possible.

“The efforts of teachers, non-teaching staff and parents should be acknowledged; all parts of the school community play a vital role in making this success happen. As our departing Upper Sixth move on to pastures new, I know they will be fully equipped for the exciting challenges of university life.

Principal of St Patrick’s Grammar School, Mr Sean Sloan, right, pictured with some of the successful students with delighted parents.[/caption]

Staff and students at St Patrick’s Grammar School are celebrating the school’s highest ever A-Level achievements with an amazing 87% of pupils obtaining 3+ A*-C grades. Almost 50% of all grades awarded were A*/A and every single A Level examination was passed. 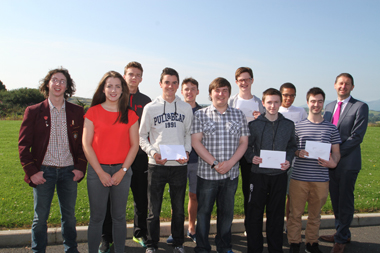 Pupils who achieved three A* at St Patrick’s Grammar School.[/caption]

Commenting on the outstanding results, Mr Seán Sloan, Principal of St Patrick’s Grammar School said: “ I am absolutely delighted that the hard work of the students and teachers has paid off. While the headline statistic for the school is fantastic, what we as a community are most thrilled about is that each student has surpassed their personal goals.

“I am sure there are a lot of very happy and relieved parents out there who can now enjoy the rest of the summer. I would like to thank them for their support and congratulate them on their son’s and daughters’ achievements.” 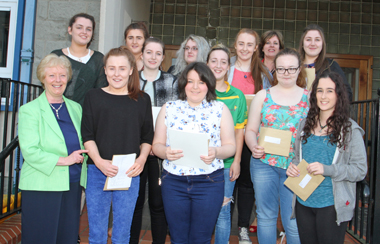 St Mary’s High School Vice Principal Rosemary Cunningham with some of the successful pupils at the school after receiving their A Level results.[/caption]

Every pupil received a pass at A Level or AS level grades in this years exams.

A delighted school principal Sheila Darling said that the pupils had all performed extra well and that the staff and their parents are very proud of them all for their hard work and commitment in a 100% pass rate.

At Shimna Integrated College, principal Kevin Lambe congratulated all of the outgoing year 14 students on their excellent A level results.

He said: “The proof of the success of academically excellent, all-ability education is in the destinations of our students. 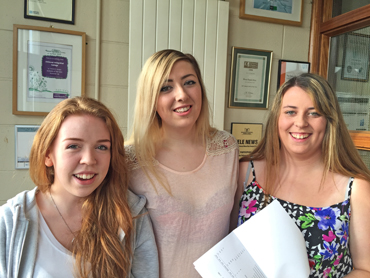 “Hannah Croman is off to St John’s College Cambridge to study Modern and Mediaeval Languages; Kirsten Diamond is off to Glasgow University to study English and French; Hannah Parks is off to Queen’s to study bio-chemistry and Ellie May Jennings to study Law; Nadia Rodgers is off to the University of Ulster to study Software Engineering; Ryan McTeer to Glyndwr University Wrexham to study Chemistry with Green Nanotechnology and Marcus Puellen to study Forensic Science; Morisi McGoon-James is off on a rugby scholarship to university in Utah and Stephen Ward to study science at university in Canada.

“And those are just examples of the range of destinations and subject areas. This was a particularly close and supportive year group who pulled together in the face of family tragedy faced by several students, and we are very, very proud of them all.”