All Ireland Ulster Bank Division 1A

It was a historic day for the County Down Club at Ballymacarn Park on Saturday (30 September) when they took to the field to face Cork Constitution in the first Ulster Bank League Division 1A game of the season. 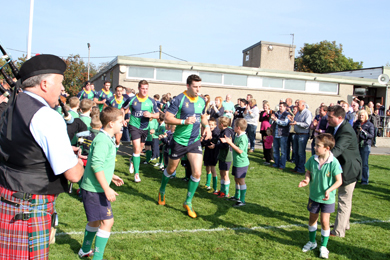 Hinch captain Andrew Morrow leads his team on to the field against Cork Con.[/caption]

A large crowd turned out and they enjoyed a beautiful sunny afternoon and a very competitive game.

In perfect conditions for running rugby Hinch played towards Slieve Croob in the first half, and quickly settled into the contest with strong running form Paddy McAllister and Stuart Morrow.

As pressure on the visitors line mounted Con infringed and Richie Lobb gave the home side a 3-point lead in the 6th minute with a well struck penalty goal. Hinch continued to control play from the restart and Lobb landed a second penalty goal in the 13th minute taking Hinch 6-0 clear.

The Munster side lifted their game from the restart and for the first time put the Hinch defence under pressure. In the 15th minute Con openside James Ryan raced for line for a certain try but a great tackle by Rodger McBurney turned him around and with Paul Pritchard assisting they prevented the grounding.

Con continued to mount pressure and eventually the home side conceded a penalty which was converted by fullback Daryl Lyons to make it 6-3. 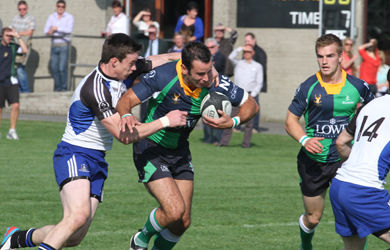 The visitors maintained their pressure after the restart and kept the Hinch pinned in the 22 until they created an opening on the left wing in the 29th minute and second row Shane O’Connor did well to score in the left corner despite the efforts of David McIlwaine. Lyons added the extras to make it 6-10.

Con made a perfect start to the second half when Lyons pushed his side a further 3 points clear when he converted a penalty from the touchline with just 2 minutes of the second half played.

The Munster side gave a master class on ball presentation and retention. Hinch found it very difficult to get any meaningful possession and field position. Lyons missed a penalty attempt in the 58th minute then the Hinch struck back. 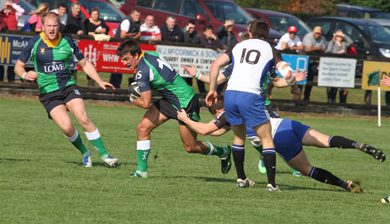 Richie Lobb No 10 makes a break supported by Neill Fallon.[/caption]

In the 60th minute good first phase possession released Lobb, McBurney and Morrow on the attack with Aaron Ferris beating Con fullback Daryl Lyons into the left corner to score the first Hinch try in Division 1A. Lobb failed to add the extras but the Hinch had fought their way back into the contest 11-16 with 20 minutes remaining.

Holland was unlucky with a penalty attempt in the 70th minute his effort hitting the right hand upright.

As the game headed into the final 10 minutes Hinch lifted their game as they pressed for victory. Kyle McCall had a charge for the line in the 74th minute but was held out and Con infringed in front of their posts. Lobb landed the penalty goal to take the score to 17-19.

From the restart the Munster side showed their experience at this level as they took control of the game in the final minutes and prevented the Ulster men getting any possession. Play concentrated deep in the Hinch half of the field and in the 3rd minute of injury time out half Johnny Holland spotted a gap in the home defensive line, and dived over to score.

Ballymacarn Park held it’s breath as Holland attempted to convert to prevent the County Down men getting a losing bonus point. Holland’s kick a goal drifted wide of the mark and the whistle blew to leave the final score 19-24 to the Cork men.

Cork Con deserved their victory; they are a quality side and were impressive especially with their control at the breakdown. Hinch can take plenty of positives from their opening game, their scrum and lineout worked well and at times they showed some of their form from last season. They were also within 3 points of victory with 5 minutes remaining and they fully deserved their losing bonus point.

Next week will be another big test as the team travel to Limerick to play Young Munster.