<![CDATA[ <div>A rare link back to the days when farmers loaded their produce at the local railway station to be sent to Belfast and beyond has been saved by the Downpatrick & County Down Railway.

A century-old wooden railway wagon built in 1911 for the old Belfast & County Down Railway, which is thought to be the sole surviving example of nearly two-hundred built for the local railway line, was recovered from a field near Dromara where it has lain for nearly 60 years. [caption id="attachment_39835" align="alignleft" width="390"] 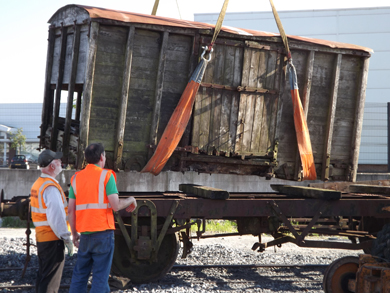 A rail wagon is moved to Downpatrick after lying in Dromara fro 60 years.[/caption] DCDR museum curator, Neil Hamilton said: “The wagon is a BCDR closed van and has been used as a store, and the roof is covered in tin which has protected the body quite effectively over the years. This wagon is, as far as I know, the only BCDR wagon that is around and in a condition that would be restorable.
He continues, “The condition of the wagon is quite remarkable for its age. The main body roof and panelling are very sound, and the main under frame is very sound apart from some rot on the lower edge areas of the side longitudinal members but in general the frame is very strong which allowed us to lift it.
“The owner was going to break the wagon up but is a friend of one of our volunteers, so he asked us if we had any interest before he did so – and we are delighted that he did!”
The wagon was lifted from its resting place last Saturday and towed by tractor and trailer from Dromara to Downpatrick, in a move that surely turned some heads on the main road.
Neil added: “Historically it’s a very significant find and fits in with our museums acquisition policy, we set it on a spare metal under frame so we could move it into the Carriage Gallery for storage and display, where it would dry out and a more detailed examination and assessment would be undertaken prior to restoration.”The wagon can be seen in the Carriage Gallery from this weekend onwards, which marks the start of the Downpatrick & County Down Railway’s ‘Summer Steam’ season, and the DCDR is always looking for people to join its ranks to help restore vehicles such as this wagon, find out more about volunteering at the railway via their website at www.downrail.co.uk or facebook.com/downrail or on twitter @downrail
]]>