<![CDATA[ <p style="text-align: justify;">SPEAKING ahead of next week’s Fisheries Council in Brussels, Northern Ireland Fisheries Minister Michelle O’Neill has warned that the negotiations this year will be particularly tough and challenging. 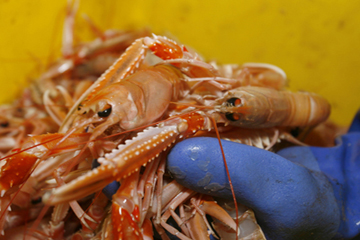 The prawn quota could be cut by 24% next week if the Brussels fisheries’ summit gets its way.[/caption]

Every December the EU member state Fisheries Ministers meet in Brussels and thrash out over two days the fishing opportunities available for the EU fishing fleets for the year ahead  and set the Total Allowable Catches for the individual species. Much of thsi is based on scientific eveidence collected by ICES, the International Council for the Exploration of the Seas.

There is much horse trading behind the scenes at all Council meetings and the Fisheries Council meeting, while being no different, will have direct and fairly immediate impacts on coastal fishing communities, many already struggling to make ends meet.

The Minister said: “This year’s December Fisheries Council is likely to be one of the toughest in years. The Commission has indicated that it wants to see real progress towards achieving the targets set down in the recently agreed Common Fisheries Reform package and that next year’s fishing opportunities must be in line with these.

“Whilst there is good news for Irish Sea herring, which sees a proposed 5% increase, the Commission has proposed a cut of 24% for prawns which is our most important fish stock. This size of cut does not reflect actual landings which remain broadly in line with the scientific advice and I will be working hard to resist the proposal within the limits of sustainability.” 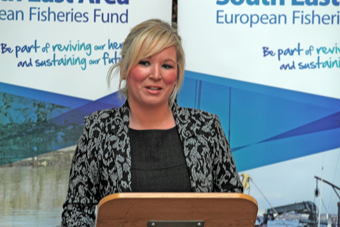 NI Fisheries Minister Michelle O’Neill who will be arguing the case for local fishermen in Brussels.[/caption]

The Minister added: “We have been working closely with the south, with whom we share this fishery and have submitted a joint case to the Commission containing sound scientific arguments that can justify maintaining the prawn quota. However, given the determined approach being taken by the Commission this year, I expect a hard battle next week.”

An Arglass prawn boat skipper who did not wish to be named said that every year the industry was subjected to  a few weeks of anxiety over the outcome of the Brussels summit, and added: “We are complying with all the legislation that we can and yet Brussels continues to put pressure on us. My understanding is that the scientific evidence supports where we are on prawn quota and this should not be changed. It is hard enough to make ends meet as it is without  this added pressure. The season last year saw a seven month period when catches were almost zero and we had a short summer this year and the winter period is again on us with poorer landings. Fishermen always draw the short straw.

“The industry needs support not more of these drastic cuts in quota. If quotas continue to be cut and we may see the  introduction of a large marine wind farm off our coast, then we may be looking at he end of the local fishing industry as it is. This would be a tragedy for jobs in the east Down area from Portavogie, Ardglass and Kilkeel.

“There are few skilled people in the Ardglass area who will benefit  from a windfarm. So we need our traditional fishing industry for jobs onshore and on the boats. There are plenty of prawns in the Irish Sea. They are quite seasonal, and that is something we have to accept. But cutting the quota significantly would be the death knell of the local fishing industry. They have to consider this.”