<![CDATA[ <p style="text-align: justify;">The Youth Forum from the Rowallene area enjoyed a meeting venue with a difference recently as they visited the Mourne Room chamber at the Downshire Civic Forum. 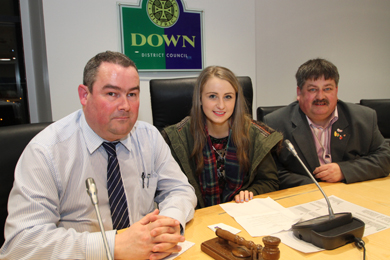 Rowallene Youth Forum Chairperson Molly Rice is in the hot seat at Down District Council with Councillors Terry Andrews and Billy Walker.[/caption]

They had been invited by local councillors Billy Walker and Terry Andrews who addressed the Youth Forum explaining their role as councillors and how the council worked.  The group also has a tour around the building.

Paul Fitzsimons, SEELB Youth Leader in Charge, said:  “The Youth Forum is made up of young people aged from 14-16 years old who met weekly to discuss local issues in their own back door. They are currently looking at the process of government in Northern Ireland and will be visiting the Northern Ireland Assembly, Westminster, the Dail, and the EU in Brussels. Their active citizenship programme may take a year to complete.

“The members in the group of around twelve are selected into roles and the various offices through peer selection and self selection. It is very democratic and open.

“They have certainly been very impressed with the building and the state-of-the-art technology in the chamber itself, and they really enjoyed the discussion with the two councillors.” 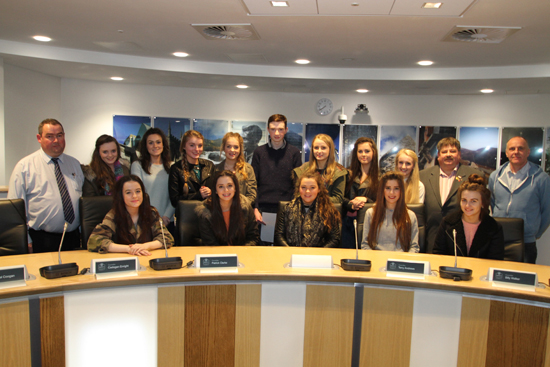 Rowallene Councillors Terry Andrews and Billy Walker with members of the Youth Forum. Inlcuded is leader in Charge Paul Fitzsimons.[/caption]

Councillor Walker gave the group a resume of local government development since 1973 up to the present Review of Public Administration and the current merger process of Down District Council with Newry and Mourne Council explaining that the new system will be more steamlined.

As the questions began to flow from the Youth Forum members, both councillors were asked why they entered into politics. Councillor Walker explained that when he was younger coming through the Troubles, he himself fell on the wrong side of the law as a young man and served a custodial sentence. But this made him realise he had made a huge misake and he said: ” I decided to give something back to my Killyleagh community. I became involved in community work and have been active ever since. My entry into politics through being an independent then through the DUP resulted from wanting to achieve more for my local community.” 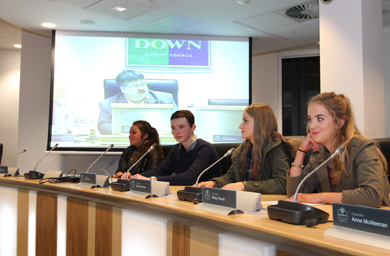 Members of the Youth Forum taking part in a discussion in the council chamber at the Downshire Civic Forum in Downpatrick.[/caption]

Cllr Andrews explained that he had grown up in Crossgar and went to school there. “I worked as a postman for many years and also worked up at Stormont. I just got more involved in working in my community and decided to go for it during the last council election.

“I printed off a lot of leaflets and canvassed around all the homes in my electoral area. I reveived 704 first preference votes which was very encouraging for myself as an independent candidate. I was involved in settting up the youth club in Crossgar recently, and a new community association has been set up. People in Crossgar are now involved more in their community affairs as the very successful Chrismas fair demonstrated.”

The discussion followed about the work of the Rates Working Party in the Council, and how it strives to balance the books in the interest of the ratepayers each year. The Youth Forum were very interested in the work the council was involved in around playgrounds and leisure centres. And they did put both councillors on the spot asking what exactly the council was doing for young people of Down District.

Councillor Walker explained how much had been achieved working with local community associations and through the Down Rural Area Partnership to bring more paly areas into the district. He also explained that the Bridge cventre in Killyleagh came about as an effort to provide facilities for the youth of Killyleagh, and that plans were ongoing to develop a leisure centre in Saintfield and discussions were taking place for one in Crossgar. The council too looks after many playing feils which are sports venues mostly at weekends.

Sonce the formation of the Crossgar Community Association, Cllr Andrews explained that “there has been considerable interest in moving things forward to building a new leisure centre in Crossgar. A lot of work needs to be done yet and funding needs to be identified, but the association is working on this.”

Both councillors concluded their comments saying that they were available to talk to anytime if the members of the Youth Forum had an issue they wanted to discuss, saying it was important that they as young people too had a voice to be heard in the community.