The announcement was made by UKIP’s Northern Ireland leader David McNarry MLA and has been warmly received by UKIP members provincewide. 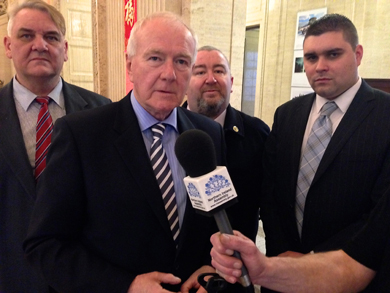 Welcoming the announcement, UKIP’s Northern Ireland chairman, Cllr. Henry Reilly said: “The Unionist Forum promised much, but has delivered little of benefit to anyone anywhere. The issues it was established to address remain largely unaddressed.

Councillor reilly said: “More than a year after it was established, it is clear the Forum has become a fig leaf for failure, inaction and inertia. UKIP believes words must be matched by action. As David has confirmed and with immediate effect, UKIP Northern Ireland is no longer a member of theUnionist Forum. We of course remain committed toworking energetically on behalf of the people we represent as well as working closely with other parties on matter of mutual interest and common concern.”

UKIP Down District representative Alan Lewis added: “UKIP at first engaged in this forum and we seen benefit in talking to others within the unionist family. A year ago I said that I support UKIP’s decision to take up their seats on the unionist forum, however, let me be very clear we are not interested in a talking shop that deflects failings.

“We want to see a active approach by all shades of unionism to combat what has been a pan-nationalist assault on our culture and traditions.

“it is clear that the active approach has not been forthcoming, and I believe  in pulling out of this farce. We can now say it is disappointing that those who ran this forum could not see fit to call a meeting in well over six months.”