<![CDATA[A Life-Changing Lotto £50k up for grabs. How would you spend yours? People in Northern Ireland are being asked to consider how a £50,000 Lottery windfall could help improve the lives of people in their communities with the launch of this year’s '<strong>The People’s Millions‘ TV funding competition. The scheme launched by Big Lottery Fund in conjunction with UTV will see a total of £200k in awards distributed throughout Northern Ireland. [caption id="attachment_37123" align="alignleft" width="360"] 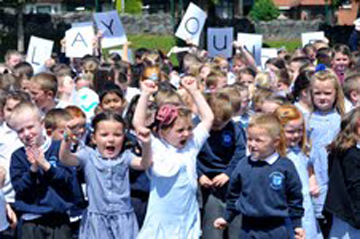 The Peoples Millions has caught the imagination of communities across Northern Ireland.[/caption] Organisations and groups are encouraged to enter their ideas for projects aimed at supporting their communities and helping those in need for a chance to win £50,000 to make them a reality. Past winning projects include families working together on healthy eating by growing vegetables together, the transformation of run down patches of land into children’s play areas, and environmental projects which have improved employment prospects or helped people in need help themselves. The most worthy causes will be voted for by the communities themselves with a final four bagging the Big Lottery Fund cash of £50k each. Now in its seventh year, The Peoples Millions awards funding to projects that improve the lives of local people throughout the UK. This year there are four awards of up to £50,000 on offer in each of the 19 ITV regions. The competition opens for entries today (13 March 2013) and a shortlist of the best ideas will be selected in October. The groups then have around a month to get their communities behind their proposals before they are showcased on UTV in November. The groups that get the most support through a telephone vote will win the funding to transform their plans into a reality. Big Lottery Fund NI Chair, Frank Hewitt said: “The People’s Millions is a fantastic way to make a difference in your area, whether it’s tackling a local problem or issue, or responding to a need for a service or support in a particular part of your community. The public will vote on who gets the money, so the ideas need to capture people’s imaginations and persuade them to vote. “It’s a huge amount of fun and a great chance to put your community on the map and mobilise support for something you care about. I would encourage everyone passionate about where they live to think about how to spend £50,000 and send us their ideas as soon as possible!” Michael Wilson, Managing Director, UTV Television said:  “UTV is once again delighted to be associated with the People’s Millions. Four projects will be awarded £50,000 each for their initiative which is a fantastic achievement for all concerned. We look forward to featuring each of the nominees on UTV Live in November.” Entry packs are available at www.peoplesmillions.org.uk and the deadline for completed entries is 12 noon on Monday 13 May 2013. For more information contact: Karen Ireland Big Lottery Fund Press Office: 028 90551 426     Out of Hours contact: 07788 640 791 Full details of Big Lottery Fund programmes and grant awards are available at: www.biglotteryfund.org.uk Follow People’s Millions on Twitter using:  #pplsmillions The People’s Millions 2013 Diary Dates

Some Background on ‘The People’s Millions’

*  Through The People’s Millions BIG will be making 76 awards of up to £50,000 to new projects that will improve local places or the lives of people in the community.

*  The People’s Millions that has given the public the chance to vote on which local projects should receive lottery good-cause funding since its launch in 2005.

*  New and existing voluntary or community organisations, schools, local authorities and health bodies are all eligible to apply.

*  Telephone voting numbers – as with previous years, ITV and the Big Lottery Fund will use a low cost telephone number. ITV and BIG do not make a profit from the voting telephone numbers.

*  BIG is committed to bringing real improvements to communities and the lives of people most in need and has been rolling out grants to health, education, environment and charitable causes across the UK. Since its inception in June 2004 BIG has awarded close to £6bn.]]>