<![CDATA[ <p style="text-align: justify;">A HIGHLIGHT of the recent European Heritage weekend at Rademon Non Subscribing Presbyterian Church, Crossgar, was a talk by Mr Jim Ferris about the history of the congregation and its Meeting House, a Grade A listed building. 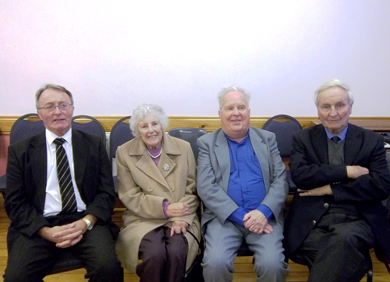 Jim Ferris said: “The first Rademon church was built within the Parish of Kilmore in 1713 and its replacement stood until 1785 when the present meeting house was completed on the same site.

“Since then there have been twelve ministers of whom the most famous was Rev. Moses Neilson. As an academic he was a renowned authority on the Irish language and he founded and ran the Rademon Academy. Several of his sons also became ministers including William Neilson at Dundalk. Once, when the latter made a visit back to Rademon and preached his sermon in Irish, he was immediately arrested by the militia and held on the suspicion of preaching sedition.

“However, he was released the next day when translation revealed that the content was religious rather than political. He subsequently became Principal of Classics At Belfast Academical Institution and continued his father’s work in completing the Guide to Irish Grammar which became widely used in schools throughout Ireland.

“Records also reveal how difficult life was for many during the 1800’s with the local effects of the famine, emigration and a high death rate from tuberculosis.

“Over the years, the meeting house has continued in use largely unchanged.

“Local landowners have been good to the congregation with the then owner of nearby Rademon Estate in 1932 kindly donating the freehold of the land on which the manse was built. Another, more recently made adjacent land available for the car park.

“The maintenance strategy is to restore rather that rebuild. The meeting house building was granted Grade A listed status which was to prove to be a life saver later in terms of eligibility for restoration grants. A structural survey in 1996 revealed that the building was in serious need of repair.

“Fortunately, thanks to substantial grant assistance from both the Heritage Lottery Fund and the Department of the Environment’s Heritage Branch complete restoration became feasible. During the restoration work, which was completed by 2002, normal worship continued by moving around to available parts of the building.

“The Meeting House is now as good as new and still looking the same as it did when first opened back in 1785,” added Jim Ferris.

Further information on Rademon church as compiled by Jim Ferris is recorded on the DVD ‘1st Kilmore Non-Subscribing Presbyterian Church, Rademon – Historic Record 1713 – 2013‘. As well as the written record, it contains a wide range of pictures and other archive material. Copies cost £5 each and are available from church members or by phoning 028 4483 0000. ]]>