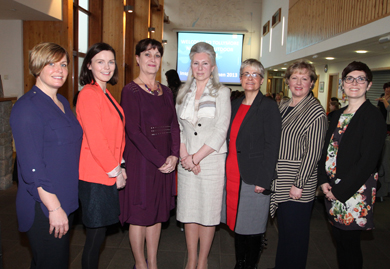 Inspirational women’s day held in the Newcastle Outdoor Centre was a great success.[/caption] Four speakers then shared their experiences with the delegates. The speakers were Esther Gishkori, Assistant Director Prison Health; Deirdre Bones, District Commander, PSNI; Naomi McMullan, Cross Platform Business Reporter, UTV; and Caroline Carney, International Lawyer. The themes included ‘Women in Employment’ and ‘What Holds Women Back’. Delegates represented local schools, community/voluntary organisations and the business sector. Speaking at the event, Down District Councillor Carmel O’Boyle said: “Given my previous role as a school teacher I was particularly keen to include representation from the education sector and the uptake from local schools and the South Eastern Regional College (SERC) has been extremely encouraging given the commitment required to the current school and college curriculums. “The main purpose of this event is to inspire the delegates to achieve their dreams whatever they may be and I’m confident that some of this year’s delegates will become speakers in the future who will in turn share their experiences as inspirational women.” A ballot was held in support of Crossroads Caring for Carers and Councillor O’Boyle thanked the very many local businesses who so generously donated ballot prizes, particularly given the current economic climate.

South Down SDLP Assembly Member Seán Rogers has spoken out in support of International Women’s’ day. Mr Rogers said: “Laura Devlin (My Constituency Manager) attended Down District Council’s Inspirational Women’s Day on the 8th of March in Tollymore’s Activity Centre. I understand that this was an excellent event with very diverse and moving speakers from a variety of walks of life.  Those present heard the first-hand experiences of some local powerful women who have achieved some great success often in the face of adversity and challenge.” Laura Devlin, SDLP Newcastle area support worker, who attended the event, said, “There was great synergy among the speakers.  It was intriguing to hear from the panel members the inequalities that still remain in relation to pay, status and promotional opportunities, within certain workplaces.   However these individuals surpassed the hurdles to achieve great personal success – whilst often having a family or caring for an elderly relative.  These individuals are great ambassadors for all who attended especially those pupils from our local schools. ” Mr Rogers added: “We in the SDLP have, since our inception in the 1970’s, had equal rights at the centre of our party’s aims and this ethos remains strong within our party.  Everyone in life deserves the same opportunities and treatment and it is incumbent on all of us to continue the fight for equality. “I was pleased to hear that the event was such a success and to also pay tribute to my party colleague Cllr Carmel O’Boyle who hosted such a worthwhile occasion. “]]>