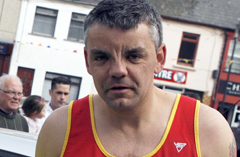 Local soccer players are organising a charity match in memory of Stephen ‘Stig’ Shannon who died earlier this year.[/caption]

THE  friends of the late Stephen Shannon have got together and arranged a challenge football match in his memory and it promises to be a  sporting treat!

The match is to take place on Sunday 10 November at 1pm in Dunleath Park in Downpatrick.

It will be contested by current and former residents of the Model Farm and the Flying Horse Estates in Downpatrick.

The coveted prize they will be playing for is the Stephen Shannon Memorial Trophy.

So far, there have been over thirty players for each side that have shown an interest in playing so there is already fierce competition for places, a great testimonial itself to their fried Stig Shannon.  I

Contact Dixie Murray  at the Flying Horse  and Jim McStravick at the Model Farm if you would like to put your name down.

Gerard Magee, Michael George and Nishy Wynn have kindly agreed to referee the ‘estates match of the century’.

Alongside the Charity football match, a raffle will also be running and there have been some top class prizes already donated.

There will be a presentation and raffle held afterwards along with refreshments in Savages Bar.