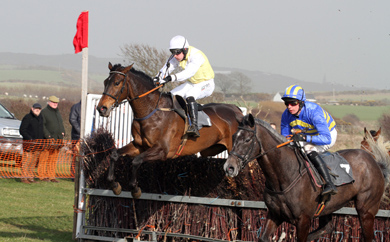 Antonenko and Iona Rose clear the last but it was Antonenko that romped home to beat As You Wish by a length in the Bluegrass Horse Feeds race fro 6-6 year old mares.[/caption]

STRANGFORD rider and trainer, Stephen Magee, followed in his father’s footsteps when landing the Hunt Race at the East Down point-to-point on Saturday writes Joe Kavanagh.

His father, the late Joe Magee, regularly targetted the Tyrella race with success. Stephen has also  ridden the Hunt race winner several times and as forecast in Down News, News From Pascal ridden by Noel McParlan proved the winner to reward supporters.

The going on the day was soft and there was no sign of the squally rain that ruined the last meeting a couple of weeks ago. But the strong wind was a factor that jockeys and horses had to deal with at the Tyrella P2P venue.

Wexford rider, Barry O’Neill rode a double  on Kiteney Wood and Antonenko before leaving to travel to Gowran Park to ride Davy From Milan in the hunterchase but was thwarted by half a length. 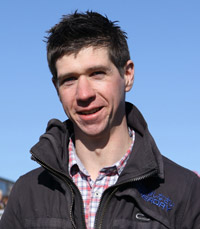 Ballyclare based owner/handler, Warren Ewing registered a winner with Ground Invasion while young rider, Brendan Brooks recorded a second career victory on Cluian Or in the finale winning easily after Garraheen Chief which was more than a fence in front fell at the penultimate fence leaving the winner an easy task to take the contest restricted to novice riders. 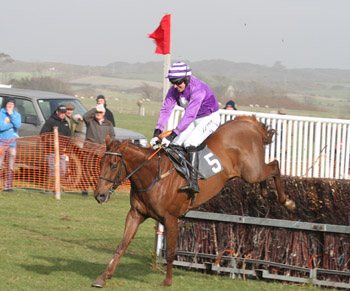 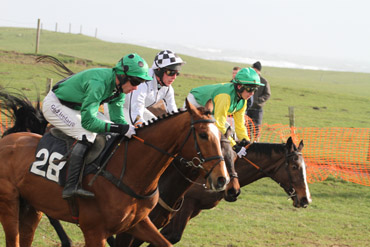 Long House Hall (winner), Captain Carleton and Eye of Horus neck in neck in the final charge up the home straight at the Tyrella P2P in the B section of the Albert Bartlett Maiden Race for 5-6 year olds geldings.[/caption]