<![CDATA[ <p style="text-align: justify;">THE Sham fight at Scarva is one of the biggest cultural events in the Northern Ireland calendar and is organised by the Royal Black Institution.  100,000 people are expected in the County Down village on Saturday, July 13.

The annual clash between King William and King James and the massive procession through the beautiful village is now firmly established as a major tourist attraction.

In recent years the then Northern Ireland Secretary of State, Owen Patterson, the Tourism Minister Arlene Foster and senior representatives from the Northern Ireland Tourist Board and Tourism Ireland attended the event to see the spectacle for themselves. 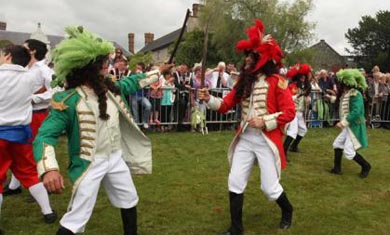 The Sham fight at Scarva draws a huge crowd annually just after the Twelfth celebrations. .[/caption]

The Sovereign Grand Master, Millar Farr, said : “The Sham Fight is now firmly established on the summer calendar for Northern Ireland. It is a wonderful event, organised by a local group of dedicated people, who ensure that the tens of thousands of spectators and the people taking part, can enjoy the day.

“There is no other event quite like the Sham Fight. It is without doubt the biggest one day event, at a single location, in Northern Ireland. Every year we have between 80,000 and 100,000 people who want to celebrate their culture.

“We know that people keep coming back every year. But, for those who have never been – they really are missing out on something special.”

Tourism Minister Arlene Foster said: “The Sham Fight is unique and as it attracts up to 100,000 visitors annually, it is one of the largest tourism events in Northern Ireland. This year we are hosting the UK City of Culture 2013 celebrations and events such as this provide fresh and interesting things for tourists to do.

“Internationally, cultural tourism is developing into one of the fastest-growing and most sustainable aspects of the tourism industry, accounting for over 40% of all world travel. The annual Scarva Sham Fight not only provides an insight into the culture and history of Northern Ireland but it is also a great day out for the whole family. ”

On Saturday July 13, the procession leaves the assembly field on the Gilford Road at 11.15am. Eighty Preceptories of the Royal Black Institution will take part in the procession, joined by a wide range of bands to suit all tastes. Tens of thousands of people will line the one mile route to the Demesne at the Loughbrickland end of the village. Tandragee District will lead the procession.

Earlier in the day, at 9.45am, members of Scarva Royal Black Preceptory will lay a wreath at the village memorial to local members of the security forces who were murdered in the Troubles.

The organisation of the Sham Fight is the responsibility of Royal Black Perceptory 1000, who work painstakingly to ensure that everything goes according to plan. Each year there are 3,000 members of the Royal Black Institution on parade, accompanied by about 80 bands. King William is played by John Adair and King James by Colin Cairns, both members of RBP 1000.

At the top of the field where the fight is staged, is the chestnut tree where King William tied his horse on the way to the Battle of the Boyne and where his troops rested. At one time Ireland could boost of half a dozen Sham Fights. One of the most famous was in the small west Cork town of Bandon, once a Protestant stronghold. However, the Sham Fight at Bandon, like all the others except Scarva have disappeared.

Only war-time brought the great celebrations to a temporary standstill, and even then a handful of locals in the Royal Black Institution travelled in the years between 1940 and 1944 to walk the processional route to maintain the tradition.

A religious service will be held at 2pm on July 13, when the main speaker will be the Sovereign Grand Master Millar Farr. He will propose the three resolutions and they will be seconded by David Livingstone, Imperial Grand Treasurer.

The chairman for the platform proceedings will be William Scott, County Grand Master of Armagh and Rev. John Batchelor will lead the service. Tullyvallen Silver Band will accompany the hymn singing.

“We the Sir Knights of the Royal Black Institution assembled with our families and friends re-affirm our faith in the Bible as the Word of God. Our Mission Statement reminds us that the Bible should be the rule and guide of our faith and practice.

“We call on all present to look to God in these difficult times and to put their trust in the Lord Jesus Christ. Let us live according to His Word, being strong in the Lord and in the power of His might.

“We support the Take 5 Project that spells out the truths enshrined in the Five Solas of the Reformation: Scripture alone, grace alone, faith alone, Christ alone and the glory of God alone.”

“We the Sir Knights of the Royal Black Institution are privileged to have celebrated this year the 60th anniversary of the Coronation of Her Majesty Queen Elizabeth II.

“Following on from last year’s successful Diamond Jubilee, it has been a wonderful opportunity for us all to renew our loyalty to the monarchy.

“Her Majesty has led the United Kingdom and the Commonwealth over the past six decades with dedication and an unfailing sense of duty and service. Her Christian principles have been an example to everyone.

“Today, it is an honour to re-affirm our loyalty to our monarch.”

“As Royal Black Sir Knights, we resolve to maintain our British identity which is founded on the teachings of Holy Scripture and the Christian faith re-discovered at the Reformation.

“The Union Flag is a key symbol in publicly displaying our Britishness and we call on our local and national governments and all the peoples of the United Kingdom to give our flag the respect and place to which it is entitled.

“We condemn the removal of the Union Flag from Belfast City Hall.  Attacks on the Union Flag and our British culture must be opposed by all lawful means necessary, we continue to encourage our Sir Knights and friends within the Commonwealth to support us in our stand as we are proud to be British and make no apology for upholding our heritage.”

In Bangor on Saturday 13 July, Lurgan Royal Black District Chapter No. 2’s twelve preceptories will be joined by members from Bangor, Comber and Newtownards districts for the parade by the sea.

The traditional family day will see members of the institution parade the short route through the town, led by Corcrain Flute Band.  The morning parade sets off at 11.00am sharp from Castle Park Avenue and makes its way around the town before dispersing at noon.  A long leisurely lunch can be enjoyed, as well as a walk around the ‘pickie pool’ accompanied with a well deserved ice cream before the return parade at 5.00pm. The relaxed seaside atmosphere ensures a great day out for all, particpants and spectators alike.