<![CDATA[ <p style="text-align: justify;">THE ruins of a church dating from the 17th century have been revealed in a conservation project by Ards Borough Council and the Northern Ireland Environment Agency (NIEA). 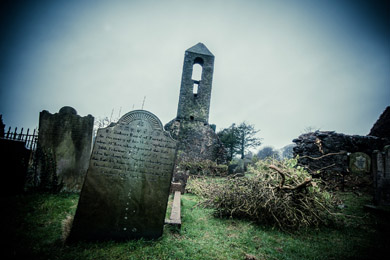 Templecranny church in Portaferry, one of the two oldest structures in the town, is designated as a ‘Scheduled Historic Monument’ and the tall western belfry of the church is now visible after delicate work to remove ivy and other vegetation.

While gravestones dating from the 1600s are still visible in the cemetery, including the Echlin Family vault where Bishop Robert Echlin, Bishop of Down and Connor from 1612 to 1635, is buried, the site itself is has more ancient origins and a medieval church almost certainly stood there.

James Maxwell, who died fighting for the United Irishmen during the 1798 Rebellion when the rebels held all of North Down and Ards is also buried at Templecranny.

“This work has had a very dramatic result, effectively re-creating the skyline of a much older Portaferry with an ancient landmark. The Council is delighted to be working with the NIEA on a project of such locally historic significance and looks forward to the results of on-going conservation work both at Templecranny and at Ballywalter,” said Mayor of Ards, Councillor Stephen McIlveen.

Environment Minister, Mark H Durkan, said: “Too often in the past we have seen our historic buildings crumble before our eyes. In planning for our future we shouldn’t ignore what has shaped us. The ruined structures that survive in many of our towns and villages are key heritage assets and  provide a very real connection to our past. In turn they will provide a worthy investment for tourism, education and the community.”

Another ancient site at Ballywalter is to be restored in a further joint project between Ards Borough Council and the NIEA.