<![CDATA[ <p style="text-align: justify;">SAUL girl Grainne Branagan (20) has been shortlisted for a prestigious international beauty pageant in aid of the Rainbow Child Foundation charity which was founded by XFactor and Dancing On Ice star Chico Slimani.

If she is successful in the next stage, Grainne will be whizzed off competing against four other girls in Disneyland Paris on 11 May!

The Face Of The Globe organisation has already taken Grainne through two rounds successfully in the Midlands heats. Initially the competition was an online application and entrants are from all over the world from as far away as America and China.  She has beat off the competition admirably but the next stage is in three rounds and it will involve facing a panel of three judges and having to give a talk.  But Grainne is looking forward to every second of it.

Grainne said: “I’m over the moon that I have got this far. I am determined now to give this all I have. It would be absolutely fantastic to win it or even get placed. 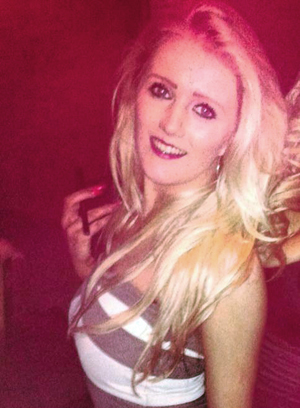 Grainne Branagan from Saul is hoping to be a finalist in the  Rainbow Child Foundation beauty pageant to be held in Disneyland Paris.[/caption]

“Currently I am studying Youth and Criminal Justice at Nottingham Trent University and I am in my second year. When I graduate I hope to work in youth and social work. I am really passionate about this area of work. I’d like to help young offenders. There are quite a few opportunities in the Midlands to gain experience here so I’ll just see what happens. That’s where I want my professional career to move into.”

With top model looks and a bubbly, vivacious personality to match, Grainne is looking forward to her beauty pageant challenge. She said: “Last year I took part in the Miss Down competition and was a finalist in Spain in Malaga. I was interested too in the Rose of Tralee competition this year and may well look at that next year as it is such a wonderful opportunity to meet so many nice people and even travel around.

“Winning the Rainbow Child Foundation pageant would be a real high moment on my life and last year’s winner did travel globally representing the organisation. That would just be awesome! “

Grainne hopes the interviews with the judges on the day will show the dedicated, caring side of her personality as well as the more extrovert outgoing girl from Saul. She added: “The finalists will be judged not just on looks, but also their personalities, and winning will mean the finalist will become Miss Publicity and Miss Charity in aid of the Rainbow Child Foundation. I hope its me!”

You can follow  Grainne’s progress in the contest at: