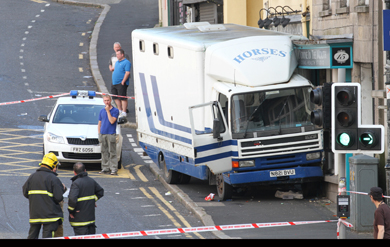 The horse trailer jammed against the front of  Downe in the Mouth dental practice in Irish Street in Downpatrock. A mother and baby were trapped below the runaway vehicle and were taken to hospital.[/caption]

The incident happened around 2pm. The horse trailer had broken down just above the entrance to the car park in Irish Street and two policemen were directing traffic around it. A mechanic had just fixed the problem when it suddenly, without a driver, lurched forward and ran onto the footpath narrowly missing the Arkle Bar entrance and knocking down the mother who was carrying her new baby in a car carrycot outside Down in the Mouth dental practice.

The horse trailer jammed into the front of the building and the woman was trapped there under the vehicle for  over  30 minutes. Initially passers-by and a midwife in the area helped until three ambulances attended the scene along with two fire tenders.

The woman has sustained cuts, broken bones and internal injuries and will take some time to recover but her injuries are not life-threatening. The baby is well. They were both taken to the A@E at the Royal Victoria Hospital.

Dental receptionist Catriona Carville said: “We just heard a huge thump when the lorry hit the front of our building. It was the last thing you would expect to happen. Before long the policeman had got under the vehicle and retrieved the baby and I took it into the surgery to look after it while he attended to the mother. 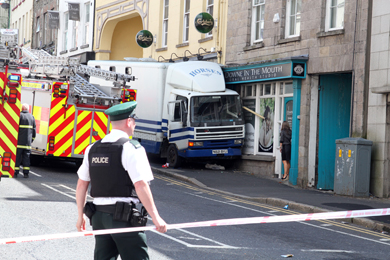 The scene in Irish Street in Downpatrick where a horse trailer crashed into a dental practice.[/caption]

“She seemed to be injured but awake and had a head wound. They both went to hospital in Belfast and we all hope they are fine. It was potentially a very serious accident. We were all surprised that the glass windows did not shatter with the impact of the lorry hitting the front of the building.  We will just have to stand back when the lorry is being removed from the building as it seems jammed under the top of the sill above the windows.”

A spokesman for the St Vincent’s shop said: “We were just loading up our own lorry when this happened. We saw the lorry roll  down hill gathering pace and next thing it had hit the dental surgery. It all happened very quickly. The breaks must have failed or it had jumped into gear. The police responded very quickly to the situation and ambulance and firecrews were also quickly on the scene.”

Gavin Oakes of Plus2Print facing the dental surgery said: “We had seen the horse trailer in Irish Street which had broken down. The police were redirecting traffic and it was getting a bit hectic. Then suddenly there was a loud bang as the lorry hit the building. It was just amazing that no-one was critically injured or worse. It is a very busy area for pedestrians and this could easily have had a very nasty  outcome.”

Arkle Bar manager Denis Feenan said: “This could have been a very bad accident. Thankfully the mother and child are not seriously  injured. Quite often our bar customers stand just outside the front door for a smoke. If there had been anyone there at that time they could well have been crushed by the vehicle which just narrowly missed the bar front and hit the dentist’s lower down next door.”

Police questioned the driver of the vehicle at the scene of the incident. He is thought to come from the Crossgar area.