<![CDATA[ <p style="text-align: justify;">A fun packed summer of entertainment kicks of the the hilarious comedy Relatively Speaking in the Newcastle Centre on Friday  and Saturday 5-6 July at 8pm. 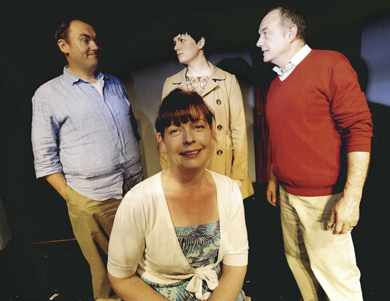 The summer season in Newcastle kicks off with a performance of relatively Speaking.[/caption]

After a long ‘rest’ local amateur dramatic society, Downpatrick Steam Packet Company, once more treads the boards with their take on an Alan Ayckbourn classic, Relatively Speaking. Previous productions by the group have included Factory Girls, The Woman Who Cooked her Husband, The Moon Descends (by local playwright Anthony Frew) and the very well received Dancing At Lughnasa.

During the intervening period since we last saw them perform the group has maintained its interest in the dramatic arts through rehearsed readings. In that period they had to deal with the loss of one of their founding members, Fiona Turley, a commemorative plague has been raised to her memory in Theatre Upstairs, Downpatrick

This production, directed by Eugene Stranney, sees the return of Karen Turley, Tracey Breen and Martin Curran. The action of the play takes place during a summer weekend in the bed-sitting room of Ginny’s flat and on the garden patio of Sheila and Philip’s home. The time is 1965. Greg arrives to ask something personal and important. The situation is complicated by a series of hilarious misunderstandings until no one (including the audience) can be exactly sure who’s in love with whom.

Just the antidote to a dull weekend, so get along to the Newcastle Centre on 5-6 July and enjoy amateur dramatics at its best.

For more information and to make a booking please contact the Box Office on 028 44 610747 or tickets available in person from the Tourist Information Centre, Central Promenade, Newcastle.