<![CDATA[ <p style="text-align: justify;">THE long-awaited review of the Common Fisheries Policy has now been agreed and the local County Down industry has already made a very lukewarm response to the Brussels decision saying that there is much small print to decipher and understand, but real expectations of an improvement for fishing opportunities for local fishermen are expected to be limited.

The EU’s political and executive institutions may have hailed the overnight (30 May) agreement on a new Common Fisheries Policy.  However, clarification is needed on much of the smaller print in the agreement  before any firm conclusions can be drawn says Alan McCulla OBE, Chief Executive of the Anglo-North Irish Fish Producers Organisation. 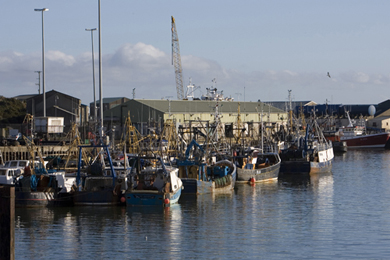 Trawlers berthed in Kilkeel will have to grapple with the new CFP regime.[/caption]

The announcement from Brussels at 3:30am this morning that a deal had been struck will not be greeted with much fanfare around the fishing harbours in Northern Ireland.

Mr McCulla said: “Fishermen are today grappling with the fallout and focusing on the problems resulting from existing EU fisheries regulations.  Unfortunately, but as expected there is nothing in the news coming from Brussels that is going to bring cheer to our members.  There is nothing that will relieve any of the pressures brought about by rules that severely restrict the amount of cod we can land or days we can fish.

“Headlines have been created around the so-called discard ban, regional management of fisheries, maximising the biomass of fish species and allowing fishermen to do more to maximise the value of their catches.  There is nothing in these headlines that fishermen will disagree with, but as we know from experience the problems will arise when the spotlight moves away from reform of the CFP and fishermen are left to struggle with the detail of what has been agreed.

“We are constantly reminded of the challenges that reform of the CFP will bring, but what people tend to forget is that fishermen have been working very hard to address the challenges brought about by the present regime.  There is only so far you can stretch an elastic band before it will break and in the rush to grab a headline-grabbing agreement, we fear the problems being faced by fishermen today are being overlooked. 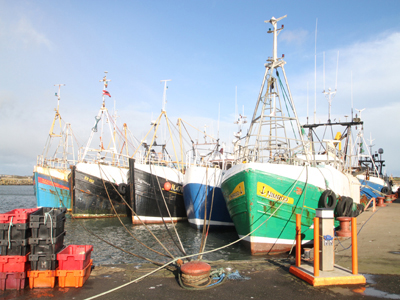 The Ardglass fishing fleet has struggled to make a living since last September 2012.[/caption]

“Be it with addressing the problems with fisheries science on which all fisheries management decisions are based, or coping with increased overhead costs, particularly with fuel, fishermen have continued to show how robust and resilient they can be.  Many fishermen have barely coped with a very tough winter and spring, but there is no doubt that our industry can have a future.”

Mr McCulla added: “If the European Commission or indeed our own administration in Belfast are serious about allowing Northern Ireland’s fishing industry to continue to be environmentally sustainable and economically viable, then they must provide the industry with the support and tools it needs to meet these objectives. Immediately this will mean DARD treating fishermen in the same way they treat other sectors within their portfolio, as well as a recognition that fishing does provide an important socio-economic role to communities all around Northern Ireland’s coast that can be built upon.”

Also Adding his lukewarm response to the fishing industry reaction, Dick James, Northern Ireland Fish Producres’ Organisation Chief Executive said: “The industry in Northern Ireland is not encouraged by this agreement. We will spend the next six months working out what has in fact been agreed and then spend the next six years trying to work round it.”