<![CDATA[A dramatic painting of Newcastle lifeboat, forging through the waves during an exercise in Dundrum Bay, has been presented to the local station. [caption id="attachment_35329" align="alignleft" width="390"]<a href="http://www.downnews.co.uk/wp-content/uploads/2013/01/RNLI_painting.jpg"> 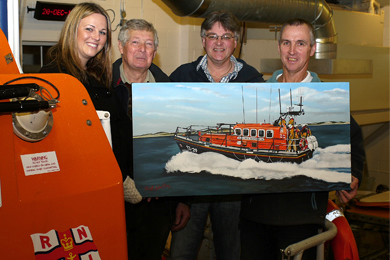 Crew member Sharon Pollock, Newcastle RNLI chairman Patrick Pinkerton, artist Geoffrey Johnston and Newcastle lifeboat coxswain Mark Poland.[/caption] The portrait of the station’s Mersey class vessel, Eleanor and Bryant Girling, was painted by Banbridge artist Geoffrey Johnston and was presented to the local crew members at a ceremony in Newcastle’s RNLI boathouse shortly before Christmas. The presentation of the painting comes as the Newcastle station marks the twentieth year of its reconstruction and relocation at the town’s harbour to house an up-to-date Mersey class all-weather lifeboat. Newcastle’s present vessel, Eleanor and Bryant Girling, which was funded by a bequest to the RNLI in memory of Eleanor Bertha Girling, is one of 31 similar rescue craft stationed around the coasts of Britain and Ireland. It is manned by a volunteer crew of six, has a top speed of around 17 knots and has a rescue range of around 240 nautical miles. RNLI Chairman Patrick Pinkerton said: “The painting was a delightful surprise and I know all the crew appreciate the gesture very much. We will ensure it gets pride of place in the station.” The Eleanor and Bryant Girling has taken part in a number of vital search and rescue operations in Dundrum Bay and the Irish Sea during its long tenure at Newcastle. Last summer alone, the all-weather vessel and its inshore counterpart at Newcastle, the Aldergrove V, were launched 11 times to go to the aid of sea users in difficulty. Geoffrey Watson’s evocative painting of the long-serving Mersey class boat will now hang in a prominent position in the station where the vessel is housed. It was received on behalf of the crew by coxswain Mark Poland, Newcastle RNLI chairman Patrick Pinkerton and crew member Sharon Pollock, who is also RNLI Community Fundraising Manager for Northern Ireland.  ]]>