<![CDATA[ <p style="text-align: justify;">TOURISM within the Mourne Mountains, Cooley Peninsula and Ring of Gullion was further boosted with the launch of a new Geotourism initiative at The Lodge in Castlewellan, Co Down on Thursday (6 June 2013.) 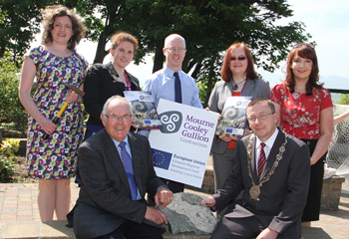 Hot on the heels of the Narrow Water Bridge announcement and the development of Mourne Coastal Route and the Mountain Bike Trails, civic and political representatives from across the region, including the chairpersons of the four partner councils (Newry and Mourne, Louth, Down and Banbridge) attended the formal launch of Mourne Cooley Gullion Geotourism.

The project will promote and enhance the profile of the three areas within one tourism destination, with a particular focus on the significant geology and archaeology.

Speaking at the launch of the initiative Lorraine McCourt, Director with the SEUPB, said: “One of the core objectives of the EU’s INTERREG IVA Programme is to support the development of new tourism products, like the Geo Tourism project, that will enable us to attract more domestic and overseas visitors. I am confident that it will not only make a positive difference to visitor numbers but will also increase visitor spend in the area, thereby providing additional benefits for the local economy.” 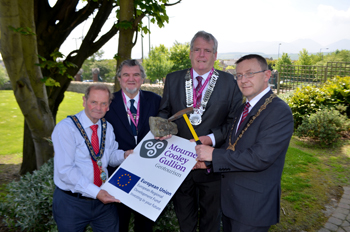 The Geotourism Manager John Devaney welcomed the opportunity to present this exciting new project, describing it as “another important development in the promotion of the region and one that will help to enhance tourism potential in an area that has so much to offer”.

John Devaney also said that “the region possesses some significant geological features that have helped to shape the extraordinary landscape around us.  This project is primarily about marketing the potential in our landscape and offering educational opportunities”.

Newcastle Councillor Willie  Clarke speaking after attending the launch of the Mournes Cooley, Gullion Geotourism initiative in the Lodge, Castlewellan, said: “This new geo-tourism destination will focus on promoting the international importance of the region’s geology and heritage; The Geo- tourism project incorporates  Louth’s Cooley peninsula and Armagh’s Ring of Gullion and the Mournes; we have an unique geological feature here that tourists, need to discover the project promotes the uplands of the three counties together, on a cross-border basis, this will have much more influence to attract people to this area than promoting them individually.” Councillor Clarke added, “This all Island tourism initiative will show case our region to a greater number of visitors and will be greatly enhanced by the construction of the Narrow Water Bridge project. I am very encouraged by the amount of positive work that is being undertaken in the Mournes area to develop activity tourism including  the world class mountain bike courses that have been developed in Forest Parks in Castlewellan and Rostrevor. [caption id="attachment_39660" align="aligncenter" width="550"]