In a survey conducted following completion of the £700,000 project in August of last year, funded by the Heritage Lottery Fund and Northern Ireland Tourist Board as well as out of the DCDR’s own funds, 600 visitors were surveyed with 87% of visitors rating the new Gallery as “excellenť and the remainder scoring it as “good”. 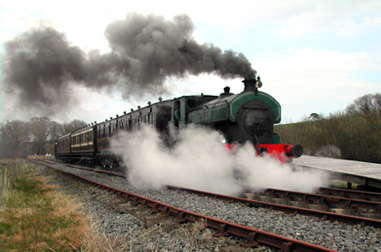 Harvey the steam engine pulls out of Inch Abbey railway station. Enjoy a trip on a train from Downpatrick.[/caption]

Railway chairman John Wilson was delighted by the results and said: “This is a dramatic improvement on previous surveys prior to the construction of the new visitors’ centre, which suggested that only 45% of people were happy with our previous museum exhibition, or indeed 20% rated access to our exhibits as only satisfactory or poor.”

When visitors were asked to name the single thing that they thought could be done to improve the heritage line, nearly 50% of visitors indicated they wished to see the current ten minute long journey extended.

“This backs up previous surveys that say a longer line should be our No. 1 priority”, said Mr. Wilson.

Currently the Downpatrick and County Down Railway operates from Downpatrick town centre to Inch Abbey, an approximate distance of just under two miles along the old line to Belfast, which was completed in 2004, but it also has another mile of railway track on the former line to Newcastle which only sees seasonal traffic.

Mr. Wilson added: “At the minute this ‘south line’, which for years was associated with the railway and a ‘trip to the Loop Platform’ is essentially mothballed, seeing only the occasional special event train, such as the upcoming Halloween Ghost Trains. It doesn’t make sense not to make use of what we have laid, but until we can take people somewhere they want to go it there’s not much future for it, and the goal for that line has always been to reach a destination similar to Inch Abbey. 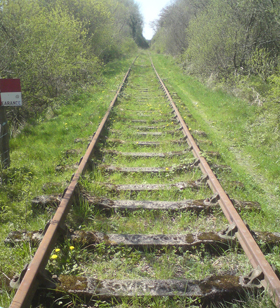 A section of rail that the DCDR would like to see back in full operation.[/caption]

“We would love to provide a rail link to the hamlet of Ballydugan, serving both the Mill and the Inn, allowing patrons to travel direct from there to Inch for a visit to the 12th Century abbey, and maybe the Racecourse too.

“At the moment an extension is not possible as the necessary trackbed, sold out of public ownership in the 1950’s, is not available, but are hopeful that this situation will change.

“We are also working on a new track layout and signalling plan which will allow us to run trains on both lines, as they are, much more easily and safely, which we hope will be completed in 2015.

“Ideally what we’d like to do is to run a train on both lines, perhaps the steam train along the old Loop Line so people could travel between an eventual destination on the South Line and Inch Abbey, changing for a diesel train for Downpatrick town at the Loop Platform.

“We’ve tried that in a limited fashion in the past and it proved very popular with our passengers, with people milling about on the Loop Platform changing trains – it added something different to the trip”.

The railway also scored exceptionally well in terms of performance, with over 77% of visitors rating the train journey to Inch Abbey as good or excellent, and value for money.

Mr Wilson suggested that reopening a closed railway line is not easy, saying: “We don’t want to promise our passengers something we cannot deliver, we want to and will work hard with the local community to see any extension of the railway completed and that any potential return of the tracks nearly sixty years after they were lifted is seen as a welcome and positive development.”

If you haven’t yet visited the new Carriage Gallery, the DCDR is currently running every weekend from 2pm till 5pm till 15th September, with walking tours of the station museum and Carriage Gallery available every Monday, Wednesday and Friday 11am-4pm.

Entry to the Gallery is free midweek, although donations are welcome, and tickets for the weekend trains cost: adults Ł5.50 return, Ł4.50 children and senior citizens, and don’t forget that children aged three years old or below go free. A family ticket costs Ł18, and Or why not join the DCD Society and get free travel for the entire summer months, as well as get regular updates on what’s happening at Northern Ireland’s steam centre?