Cllr McGrath said: “A meeting was organised in the Down Leisure Centre with NI Water and the DARD Rivers Agency together with DRD Roads Service  to try and determine the best way forward for businesses on Market Street in light of these annual flooding events. 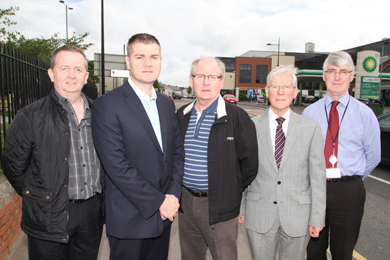 “I was disgusted that Water Service and Rivers Agency could not even be bothered to turn up or send an apology for missing a meeting with locally elected representatives about a matter of such importance. I do believe it shows the contempt that each department shows the representatives of this area and it will not be tolerated in the future.

“I have instructed council officials to write to the relevant departmental Ministers and demand an explanation for the lack of attendance and for no apologies.

“Roads Service did attend and there was fruitful and useful information from them to help businesses should they be in the difficult situation of flooding in the future.

“Their help and assistance was constructive and we are thankful to them for it.

“I appreciate that the work by NI Water at present is going to assist businesses in the future but some assurance from them at the present time – when businesses have once again been flooded – for the third time in 18 months would have been useful.

Noel Trainor, a local dry cleaner on Lower Market Street, said: “I have been repeatedly flooded over almost 30 years. Each year this has happened almost. I’ve been flooded I believe 28 times it does a lot of damage. I may have 30 duvets stored and the water just ruins them.

“I can’t even block the water with sandbags as it seem to come up through the floor inside. It is just a hopeless situation. I’m the worst affected. My ground floor shop must be the lowest level  building on Market Street. Something must be done. I just hope these new measures that will come into place will be effective.”