<![CDATA[<strong>NAFL Premier Division League Kilmore Rec 3  Killyleagh  1 THIS local derby always draws a crowd and the fans were not disappointed as both teams gave their all. For the first 12 minutes it was an even affair as both vied for supremacy but the first real chance emerged when Kilmore’s Peter Pelford broke through the Killyleagh defence and it was the last split second block by right back Jordan Kennedy that denied Telford a goal. [caption id="attachment_36670" align="alignleft" width="380"] 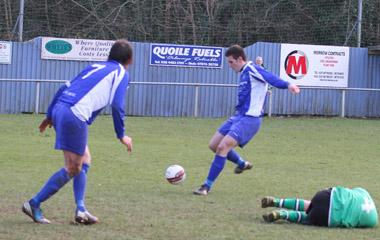 Kilmore Rec kept up the overall pressure on Killyleagh to secure a comfortable win.[/caption] Gradually Kilmore raised the bar and their work pace increased, and the feeds from midfield and short passing up front started to take a toll on Killyleagh. Cracks appeared in the defence as Kilmore pressed home a series of energetic attacks. Killyleagh’s Stephen Douglas showed great form in playing from a deep defensive position and fed balls to the forward line repeatedly, one ball to Mark Holland whose volley was just wide of the post. Then Sean Bell rattled his way through the Killyleagh defenders and after the ball went loose he found it at his feet with space to shoot and he made no mistake as the ball hit the back of the net in the 27th minute putting Kilmore one up.  Bell was having a good game but shone more in the second half on the left playing deep. The Kilmore attacks came mainly from the right wing and often were driven by Karl Lewis who was showing excellent form by his short passing which added a barb to the pace of the Kilmore attacks. But in a quick reply Killyleagh caught Kilmore napping and Ryan Montgomery took on Mark Holland and found the space and made no mistake in the finishing at a sharp angle to keep the visitors in the game a goal up at five minutes from half-time. As the second half got under way, Kilmore’s Peter Telford, Karl Lewis and Phil Traynor were intent on wreaking havoc and the Killyleagh back line of Jordan Kennedy, Gary Murray, Barry Walsh and Hugh Dickson were under pressure early on. Within two minutes, Douglas was lining up a free kick two yards outside the box. He nonchalantly then sent a tremendous shot bending into the top of the Killyleagh net to put his side back on an equal footing. But then Killyleagh turned the tides and it was their turn to put on the pressure on the Kilmore goal with repeated challenges. But true-to-form Kilmore were fighting back again and Telford was put through by Phil Traynor and was blocked physically just before he knocked the ball into the Killyleagh goal and there were serious shouts from Kilmore for a penalty as Telford lay on the ground injured in the box. After 20 minutes Telford was replaced by Ian Smith. Always dangerous, Kilmore made another break from the right as Karl Lewis send an excellent ball through to Bell but it was just a trifle too strong and Bell could not get it under control quick enough as an open segment of Killyleagh goal beckoned him. The match was not going entirely Kilmore’s way and Killyleagh’s Ian Hutson just missed a great opportunity as he chipped a ball from the back of the box but it just missed the top post. Then it was Ian Smith’s turn to skew a ball wide past the left Killyleagh post. There was definitely a feeling that another goal was on the cards. And either team could score it! Sean Bell in the second half was making an increasing number of penetrating challenges and on one occasion had beat the defenders to face the net and stumbled missing the ball – his second major miss! As many of the Kilmore attacks came from the right, it was no surprise to see Karl Lewis again charging to wards the Killyleagh goal but as he reached the centre of the box was clipped by Killyleagh’s William McIlroy and a penalty was promptly awarded as Lewis hit the dirt. Douglas again stepped up to the spot and drove the ball into the top right hand corner to put Kilmore 3-1 up in the 40th minute. The overall pressure by Kilmore paid dividends and with minutes left Killyleagh fought back but in the dying embers of the game after all the near-scoring drama, the final page was written by Sean Bell who rounded several defenders, lost the ball, was felled, but got back on his feet and in typical Sean Bell fashion, tenaciously gaining possession and found half an empty goal and shot – only to be inches wide of the post. It would have been a gutsy goal to end what was an entertaining and sometimes physical match for the spectators. Kilmore Rec: Michael McKenna, Stephen Douglas, Mark Miskelly, Mark Holland, Johnny Cheevers, Andrew Baggley, Karl Lewis, Niall McCarthy, Peter Telford, Phil Traynor, Sean Bell. Subs – Matthew Hardy, Jack Larkin, Ian Smith. Killyleagh: Andrew Wallace, Jordan Kennedy, Gary Murray, Barry Walsh, Hugh Dickson, Niall Walsh, Ian Manus, Darren McConnell, Adam Neill, Niall Young, Ryan Montgomery.  Subs – William McIlroy, Johnny Murray, Daryl Heaney.              ]]>