<![CDATA[ <div>KEN Nixon from Killinchy is the recipient of the Paddy Patterson Award which recognises individuals who have brought honour to the province and served Ulster sport with great distinction over a period of years.

It is not only the sport of badminton that Ken has made an impact through his volunteering efforts.
He is a Trustee of the Mary Peters Trust and has recently been appointed to the Board of the Northern Ireland Commonwealth Games Council.
As a lawyer, with a keen interest in sport and the law he has provided pro bono advice to governing bodies and clubs over a number of years.
Jackie Fullerton who was host for the evening said: “Ken is hugely respected in the administration of local sport, always available for advice, with a great depth of knowledge and wisdom.  He is a worthy recipient of the Paddy Patterson Award.
[caption id="attachment_35549" align="aligncenter" width="500"] 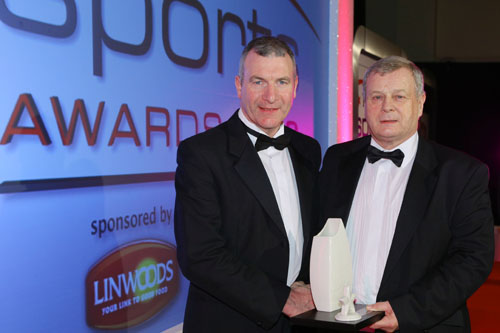 At the BT Telegraph Sports Awards, Ken Nixon from Killinchy is pictured collecting his trophy. (Photo by Presseye)[/caption]
]]>