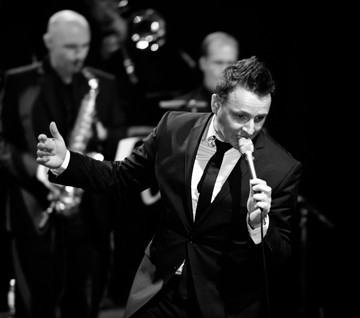 James Huish is coming to Newcastle on Friday 9 August in the Newcastle Centre at 8pm.[/caption]

James Huish makes a welcome return to the Newcastle Centre on Friday 9 August at 8pm.

Fresh from a sell-out run at the Grand Opera House, James Huish and his fabulous nine-piece band are definitely the group of the moment. Singing all the classic standards from Sinatra to Bublé, James is a mixture between Harry Connick Junior and Michael Bublé himself. James and the band are looking forward to returning to Newcastle and will be performing some of their favourite songs.

Expect to hear hits such as Everything, Lost, Cry me a River, Haven’t Met You Yet, Heartache Tonight, Crazy Little Thing Called Love coupled with Rat Pack classics from Frank Sinatra andDean Martin such as Mack The Knife and The Way You Look Tonight.

James Huish and his band provide much more than a musical tribute of the man himself, Michael Bublé, but offer an engaging night of dancing with professional sound and lighting complete with an amazing live band. Bring your dancing shoes this is a night most definitely not to be missed.

Tickets are available from the Visitor Information Centre, Newcastle Promenade or from Down Arts Centre Box Office by telephoning 028 4461 0747.