Mr.Hazzard said that more must be done to accommodate the need and added: “Recently I wrote to the Housing Executive in order to find out what exactly the need for social housing in the East Down area was according to their most recent statistics. I have now received a response to this request by NIHE who outlined the following need for housing as follows: 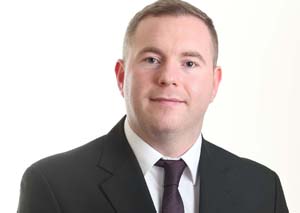 Chris Hazzard MLA is concerned about the investment onto social housing in East Down.[/caption]

“As you can see from these numbers, the social housing need in some of our towns is still quite staggering with Newcastle having a need of 65 units more than a town the size of Downpatrick.

“The response received from NIHE does explain that there are a number of schemes being put in place to deal with this projected need and I have now requested a detailed outline of what exactly these schemes are and how much need they will actually address.”

Mr.Hazzard continued:  “However, it is clear that more needs to be done to deal with this type of outstanding need, especially in the short term. Many of the people who make up these numbers are designated homeless or in temporary accommodation and it is imperative that housing is made available to accommodate this.

“I look forward to a further response from the Housing Executive on this matter and I hope that we can soon make a dent in the large number of housing units needed across the East Down area.”