The soloists are post-graduate opera students at the Royal Conservatoire of Scotland – one of Europe’s premier opera schools.

The chorus is made up of members of the NewQuay Singers. The Ireland Chamber Orchestra, with harpsichord continuo, will accompany the performance.

The stage set is by members of the Portaferry Art Club and this production is truly a cross-community social event. 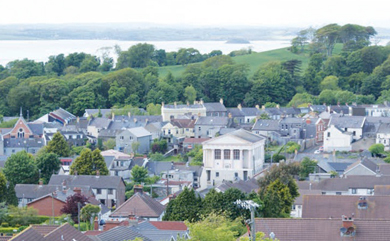 The Portaferry Presbyterian Church is out of action this year for the annual opera due to renovations but the performance goes ahead in the community hall.[/caption]

This production is supported by the Arts Council of Northern Ireland

Tickets are available at  www.friendsppc.org

or from Ann Wilson on 02842728377 price £10 or £25 with supper afterwards.  This gives the audience a wonderful opportunity to meet the performers (and who knows, maybe for a little more music too).

This year, with Portaferry Presbyterian Church being closed for a £1.5m facelift, fPPC has decided, along with its community choir, the New Quay Singers, to stage a production of Handel’s pastoral opera ‘Acis and Galatea’.  As a pastoral opera this is a light and very beautiful piece that has been constantly in performance since it was first staged for the Duke of Chandos in 1717.  Individual arias, such as – Oh Ruddier than the Cherry and Consider Fond Shepherd  have become firmly embedded in the popular solo repertoire.

Four of the very best post-graduate opera students from the Royal Conservatoire of Scotland will take the principal roles: Acis – Kenneth Reid; Galatea – Hazel McBain; Polypheme – Arshak Kuzikyan; and Damon – Luke Sinclair (who is also the Director of the performance).  These soloists are all already much in demand throughout the UK and further afield.  Those who have attended other recitals by the New Quay Singers cannot fail to remember Luke Sinclair’s stunning tenor voice when they performed Haydn’s Seven Last Words of Christ and the Goodall Requiem.

For the performance the soloists and chorus will be joined by the Ireland Chamber Orchestra.  The members are all professionals well known in Ulster’s music circles. Matthildur Gisladottir, also from the Royal Conservatoire, will provide harpsichord continuo.

Ian McDonnell, Chair of fPPC, said “This is a very big year for the friends.  We are about to embark on our long planned £1.5m restoration of Portaferry Presbyterian Church.  This will give us not only a superbly restored grade A listed Greek Revival building, but also one which will be open both to its congregation and to the whole community as a centre celebrating the heritage of the region and the heritage of Christian church music.  In addition, it will be equipped as a centre for the performing arts and we cannot wait to hold our first concert there in 2015.  For this year, though, we are very excited to welcome some of the very best young operatic talent to Portaferry.  I have heard some of the rehearsals and I can promise everyone a truly memorable evening.  We are also very grateful to Cecilia Stephens and Joyce Brown and their helpers who have produced a magnificent stage set.”

The opera will be in St Patrick’s Community Hall next door to the church building in Steele Dickson Avenue and is generously supported by a grant from the Arts Council for Northern Ireland.  It will begin at 7.30pm.