Commenting after the debate, Mr. Hamilton said: “I have secured this debate at Stormont in the hope that I can – on behalf of the fishermen of Strangford Lough – make a direct plea to the Minister of Agriculture to produce a plan that not only secures the Lough’s fishery but develops its undoubted potential.

“The Strangford Lough fishery is small and has been placed under inordinate pressure to the extent that its future as a sustainable fishery is in major doubt. The decision to enforce an exclusion zone in almost 1/3 of the Lough as part of attempts to restore damaged horse mussel beds may succeed in staving off infraction charges from the European Union but it could result in making fishing there unviable.

“As the Department responsible for fishing in Northern Ireland, it is my belief that DARD owes the fishermen of Strangford Lough a duty of care. It is absolutely essential that now that the horse mussel issue appears largely settled and the exclusion zone is a reality, it is time to turn our attention to how the fishery can be sustained and become a success.” 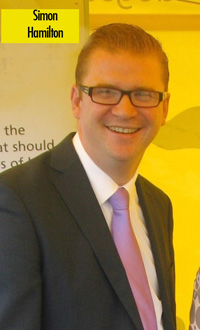 Strangford MLA Simon Hamilton has succeeded in getting an adjournment debate in Stormont on the Strangford Lough Fishery.[/caption]

Mr Hamilton said that there was no single or easy fix to this situation.  “We need a comprehensive package of measures that deals with both the effects of the imposition of the exclusion zone and develops the fishery for the future if we are to have a fishery in Strangford Lough for years to come.

“Given that such a large section of the Lough is now out of bounds for the fishermen, the fleet – small though it is – needs to be right sized with a decommissioning or tie up scheme considered.  A Management Plan, underpinned by a proper permit scheme, must be developed to regulate the number of boats fishing in the Lough. A suitable compensation scheme should also be considered.  And the newly appointed DARD Fisheries Officer for Strangford Lough should become more of a development officer than an enforcement one.  All of this must be done in concert with the industry.

“The fishermen in Strangford Lough catch some outstanding seafood which is prepared and sold in pubs, restaurants and hotels around the Lough’s shores and further afield in places like London and Paris.  Not only is it an export industry with the capacity to grow but it makes a considerable contribution to the tourist economy of the Strangford area.  Indeed, I would like to see a study of the impact of the fishery on the wider local economy. “Without the fishery I am in no doubt that our tourism offering would be adversely affected so I would like to see DARD consider pursing EU protected name status for some of the Lough’s seafood, a marketing campaign working alongside local hotels and restaurants to encourage people to enjoy Strangford Lough shellfish and training and support for fishermen to let them use their vessels for other tourism related purposes.

“As bleak as the picture might seem for Strangford Lough’s fishermen, I know that they are a tenacious group of people.  The future of their livelihoods may be under threat but I know that they won’t give up without a fight.  All that I ask of the Minister of Agriculture is that her Department works with the fishermen of Strangford Lough to give them a fighting chance in the future.  I was pleased to hear the Minister respond positively during the debate to the possibility of a decommissioning scheme as well as embracing my ideas which could realise the potential of the fishery.

“I still believe that there is something in Strangford Lough that is worth preserving for future generations to enjoy but without a little help from DARD on building a sustainable fleet and then developing the potential of the fishery, then the prospects for the fishery will not be positive,” added Mr Hamilton.