A proposal to set up a ferry between Greencastle in County Down and Omeath in County Louth could be sunk if difficulties around developing a stretch of road cannot be resolved.
Residents living along Greencastle’s Pier Road have raised concerns about road proposals which Carlingford Ferries Limited have proposed if the development of a ferry service between Greencastle and Greenore goes ahead.
[caption id="attachment_40000" align="alignleft" width="390"] 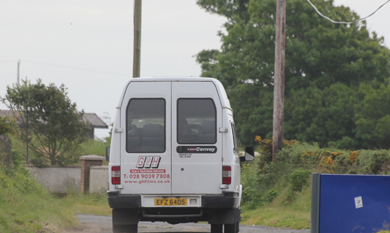 A small van takes up much of the road at Greencastle.[/caption]

It is understood that Carlingford Ferries are expected to submit planning for a ferry service between Greencastle in Co. Down and Greenore Co Louth in the coming weeks. Last week a drawing of the proposed road changes were sent to a number of residents who live on Greencastle Pier Road.

Greencastle Area Residents Group Chairperson Diarmuid Cahill said: “A large number of residents have been in contact with me since last Saturday, when they received drawings on the proposed road upgrades from Carlingford Ferries.  The proposals include the introduction of passing bays, road calming measures and widening of certain parts of the Pier Road.”

“In February the residents group held a public meeting in relation to the proposed Ferry development, where the majority of concerns raised surrounded the lack of infrastructure in the area for such a development to take place.  It was clearly outlined at this meeting that the majority of residents were against the ferry proposal, and that if such a development were to take place the road would have to be upgraded to the correct standards to allow two vehicles including buses to pass and would also need to include footpaths etc.  The minimum standard Translink require is 6.1m for two way bus flow, while the standard set out in the Design Manual for Roads and Bridges (DMRB) for a normal carriageway width is 7.3m.

Mr Cahill added: “Carlingford Ferries and RPS their design engineers have known for a long period of time that the road infrastructure in the Greencastle area is well below the standards for such a development to take place.  RPS highlighted this in their Assessment of Access Roads in October 2011 – In that Assessment they stated ‘It is clear that most of the roads in the area surrounding the proposed development site are well below the normal required standards. It is also clear that DRD Roads Service are unlikely to provide funding to upgrade these routes despite the fact that most of them do not meet current design standards’. 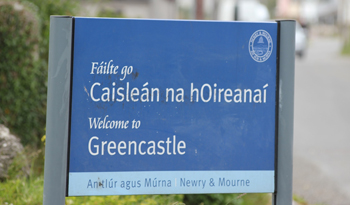 Greencastle residents are concerned about a ferry development proposal going ahead and say road infrastraucture is inadequate.[/caption]

Under a Freedom of Information request, Greencastle Area Residents Group discovered that Road Service held a meeting with Transport Consultants Count Us In Ltd working on behave of Carlingford Ferries on the 13 May 2013, where it was highlighted that Give Way to Oncoming Traffic’ signage along the Pier Road would not be appropriate for such a location, and that Greencastle Pier Road could not meet the criteria for traffic calming.  It was also highlighted that there may be issues with the bridge on the Benagh Road.

“On the 30 May Road Service, inspected the full length of Greencastle Pier Road,” addd Mr Cahill, “and since then have notified Count Us In Ltd that they “consider that to cater for the number of vehicles which the ferry will have capacity for the submitted mitigation measures proposed would not adequately address concerns regarding road safety and traffic progression’.

“We will be looking very closely at the new legislation on PPS 16 recently announced by DOE Minister Attwood and how this will impact on the ferry development. There are strong environmental reasons against the project and Roads Service needs to look closely at this.”

A Roads Service spokesperson advised that they are aware of the proposed planning application due to be submitted for a ferry service between Greencastle and Greenore. This will be considered in accordance with the normal planning consultation process. As part of this process, discussions will continue with the applicant’s consultants about potential impact on local roads infrastructure and any mitigation measures needed to be implemented as a result.”

A spokesperson for Carlingford Ferries said: “We have engaged extensively with the Greencastle community on this project including conducting a survey, meeting with the resident’s committee, hosting a drop in event, attending a public meeting, issuing a newsletter and sending residents drawings of the road improvement proposals. We were unable to attend a residents committee AGM on 10 May and we are currently waiting on the committee to come back to us to reschedule an update meeting. “We have always acknowledged that the Greencastle Pier Road needs to be improved and have engaged with residents on this matter- we have been working over a period of time to put forward a series of road improvements including purchasing land to widen the road. “An independent Economic Impact Appraisal completed by Dr Pat McCloughan indicates that in the region of 24 direct jobs and at least 300 jobs could be created and sustained in the region as a result of the proposed car ferry. It also suggests that the ferry would create upwards of €10 million of additional annual spending in the region and would open up tourism and economic links between the two counties north and south of the border. It would enhance proposals for a Bridge at Narrow Water by creating a circular tourism route between the Mourne region and the Cooley Peninsula.”

Ruane Says There Must be Good Consultation

South Down MLA Caitriona Ruane (Sinn Féin) commented that “there must be consultation in any proposed planning permission for the Greencastle ferry. Ms Ruane said: “I have met with both the residents and the developer in relation to the ferry proposal and I have emphasised that there must be full consultation on any development. “Sinn Fein has always promoted cross border projects as long as they have the support of the local community so it is essential that people are in agreement before proceeding. “Once the application for  planning permission is submitted, I will examine the proposal in detail while continuing to liaise with both parties.”

His Department has said that Planning Policy Statement (PPS) 16 will bring forward clearer, more flexible planning policy creating more opportunities for tourism that will be beneficial to the local economy and will protect tourism assets from inappropriate development. However, many residents in Greencastle will be looking at this new policy and wondering where they are in terms of ‘sustainable development’.

The policy will make it easier for developers and other stakeholders to bring forward tourism proposals that are appropriate and sustainable in towns, cities and the countryside.

*   the inclusion of an exceptional circumstances policy, this means that unique proposals for a major tourism development project in the countryside, which will bring jobs and tourists to rural communities and benefit the tourism industry, can be approved;

*   the removal of the requirement for an applicant to demonstrate ‘need’ for tourist accommodation in the countryside will make it less difficult for applicants to bring forward proposals, and easier and quicker for the planning authority to process applications;

*   holiday / caravan park sites in the countryside no longer need to be within the Development Plan, as required by Draft PPS16. In rural areas, new or extended holiday parks will be required to integrate into the surrounding countryside and to demonstrate a high quality layout and design;

*   expansion of the Draft PPS16 provisions for hotels to now also include proposals for guest houses and tourist hostels in the countryside.

However, challenging PPS !6, Friends of the Earth NI spokesman Declan Allison said: “This Planning Policy Statement is yet another example of economic considerations trumping all others. The Executive is determined to create a planning free-for-all. We have already seen the Environment Minister’s approach to tourism sites when he risked the World Heritage Site status of the Giant’s Causeway, and when he allowed the unique Drumclay crannog in Enniskillen to be bulldozed. Northern Ireland’s most precious places are being sacrificed on the altar of profit.

“The Minister insists this policy is about sustainable development. Merely including the phrase doesn’t make it sustainable though. True sustainability is about maximising economic, social, and environmental factors, not balancing one off against the others. It’s hard to see how elevating economic considerations in this way can be seen as sustainable. It will most likely result in the destruction of the very attractions the Minister claims he wants to protect.”

In explaining the new PPS 16 policy, Minister Attwood said: “The planning system plays a crucial role in assisting and supporting a thriving tourism industry. My officials have worked closely with the tourism sector to develop PPS16 to help achieve this. PPS 16 provides a common sense planning policy framework that is right for Northern Ireland that achieves the correct balance between development and protection.

“The new policy aims to manage the provision of sustainable and high quality tourism developments in appropriate locations within the built and natural environment. This will reinforce the green and clean credentials that make the North such a special place. It will provide a planning framework that will help boost the economy as tourism serves as an economic driver. As the tourism sector grows in a sustainable way, so do jobs, services and facilities.

“PPS 16 underpins the recently announced half a million pound regeneration fund for coastal communities and the £1 million dereliction fund that I have made available to tackle dereliction and spruce up a number of areas in Northern Ireland. The built and natural heritage will drive future increases in tourist numbers and spend. Six of the top ten visitor attractions are features of our built and natural heritage. Growing tourism from a £500 million to a £1 billion a year industry will revolve around the positive protection and development of this heritage and this new policy that I am bringing forward will help to do this.”

The Minister added: “I believe it is important to afford protection to tourism assets associated with our natural and built heritage, not only for conservation reasons, but also to ensure their continued effectiveness in attracting tourists and underpinning the tourism industry,” adding that PPS 16 is aimed tol protect tourism assets from insensitive development, not just tourism development, to avoid damage to their quality and character.