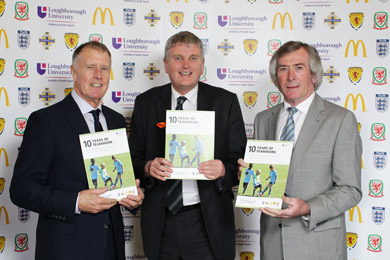 Sir Geoff Hurst, Director of McDonald’s Football, and Football Head Pat Jennings with South Down MLA Jim Wells, centre forward, at the launch of the report – “Ten Years of Teamwork”.[/caption]

Over the past ten years grassroots football coaching has seen a surge in popularity across Northern Ireland, with 727 qualified coaches now actively involved in the grassroots game, according to a report by McDonald’s.

The report –Ten Years of Teamwork – was commissioned by McDonald’s to celebrate the tenth anniversary of McDonald’s Community Partnership with the Irish FA.

The report set out to review what has been achieved over the last ten years in the grassroots game and to understand how the voluntary game can be developed further.

Key findings from the report include:

*   Together McDonald’s and the Irish FA have created over 700 new qualified coaches in Northern Ireland.

*   90 coaches each year receive ongoing coach mentoring, plus there are four large scale master classes where a minimum of 60 coaches attend.

Another area that has seen a real shake up is the children’s game, which has benefitted from the McDonald’s Small Sided Games programme. The programme takes place at over 50 locations across Northern Ireland, with over 500 teams and 6,000 children taking part. 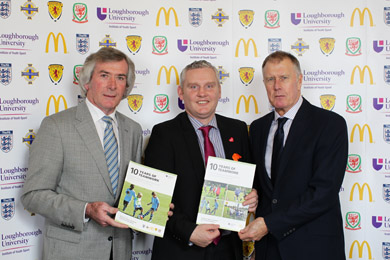 The growth in popularity of the grassroots game and coaching has been hailed by Northern Ireland legend and McDonald’s Head of Northern Ireland Football Pat Jennings as “hugely encouraging and potentially brilliant for the future of the game”.

The study was compiled in association with Loughborough University’s Institute of Youth Sport, by the Senior Research Associate Dr Steven Bradbury and Professor Barrie Houlihan, who analysed the growth of grassroots football across the UK.

Dr Steven Bradbury said: “The grassroots game across the UK during the past decade has undergone a major transformation, with a dramatic surge in the number of qualified football coaches in Northern Ireland.

“This has enabled a more professional approach to the delivery of football to children and young people more generally, but seems to have increased the accessibility and heightened the appeal of the sport amongst girls especially. Where clubs have benefitted from improved infrastructures, there is evidence of a growth in girls’ participation with increased and more focused efforts to establish a sustainable framework for girls’ football in recent years.”

The report was revealed in front of Northern Ireland Assembly members and members of the football community at Parliament Buildings. McDonald’s Director of Football Sir Geoff Hurst hosted the launch and said: “Over the past decade I’ve seen grassroots football take a huge leap forward in terms of progress and quality. We boast more young players in the game now than we ever have before, with the number of coaches, volunteers and accredited clubs showing strong increases too.”