<![CDATA[ <p style="text-align: justify;">WHETHER it’s counting the spots on a ladybird or spying on a great spotted woodpecker, wildlife watching during the early summer in County Down is an activity not to be missed.

Join the Newry and Mourne District Council’s Biodiversity Officer, local natural history group Mourne Nature Watch and the Mourne Mountain Landscape Partnership for a voyage of discovery on Saturday 15June, at Mourne Park and Silent Valley to uncover the wonderful and often elusive creatures that live in our woodlands and learn a little more about their habitat. 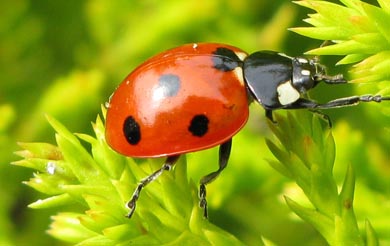 A ladybird – one of the many spotted creatures you will see on the Mourne nature trail. (Photo by Dave Seipp).[/caption]

From woodpeckers and warblers, rhinoceros beetles to ladybirds, there’s an enormous number of interesting creatures waiting to be found in our wooded areas. Emma Cunningham, Project Officer with the Mourne Mountains Landscape Partnership said: “This event is a great opportunity for both adults and kids to get out and explore our woodlands, and experience for themselves the stunning diversity of wildlife that makes itself known during the summer month.”

Keen wildlife watchers will also have the chance to take part in ‘real’ science by identifying and recording the plants and animals found throughout the day, with the results feeding into a national online database for recording biodiversity.  “As well as having lots of fun, this event will help everyone to understand the importance of helping our local biodiversity and inspire people to join us in recording what they see when enjoying the outdoors at different times of the year”, said Biodiversity Officer, Danielle Begley.

This is a free event to involve local people in biodiversity recording. These events are being run as part of the heritage lottery funded biodiversity games project and the Mourne Mountain Landscape Partnership. Newry and Mourne district council, Mourne Nature Watch and the Mourne Mountain Landscape Partnership offer a host of free events throughout the year, from Whalewatch and mammal tracking, to nature walks and natural history talks.