Senior citizens from the Acting Up theatre group have joined with Ministers at Stormont to raise awareness of how the arts can enrich the lives of older people.

The Acting Up group`s ‘A Beginner’s Guide to Growing Older’ represents one of the many attractions at the Imagine Arts Festival for older people – the first ever event of its kind to be held in Northern Ireland – taking place at Belfast Waterfront on Saturday 8 and Sunday 9 June. Presented by Belfast Waterfront and Kaleidoscope, the Imagine Arts Festival, celebrates older peoples’ enjoyment of the arts, highlights the positive role the arts can play in their lives and aims to encourage older people to get involved. 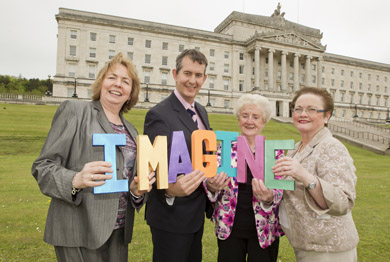 This unique two-day event features a bumper programme of arts events, performances and workshops, offering the young at heart the chance to try their hand at a wide variety of different art forms, with workshops on offer across a wide range of pursuits, from creative writing to ballroom dancing. Thousands of older people across Northern Ireland participate in some form of arts activity every week, either privately or as part of a group. Enjoying the arts can create a huge impact on older people’s lives, improving physical and mental health, combating isolation and depression, helping them to stay connected with their friends and their community and enabling them to express their imagination and creativity. After meeting with members of the Acting Up project at Stormont, Health Minister Edwin Poots said: “There is a growing body of evidence of the value of the arts in health and social care, particularly among the more senior members of our population. As we get older and our health starts to decline finding an activity can help raise morale, provide an element of normality and aid the recovery process. Having access to a variety of arts programmes can be a welcome pursuit for all. This excellent work by the festival organisers helps galvanise community participation with the aim of enhancing the health and wellbeing for all participants.” Councillor Bernie Kelly, Chair of Belfast City Council’s all party Older Peoples Group, commented: the first ever Imagine Arts Festival helps to further reinforce Belfast’s position as the UK’s friendliest place for older people. Counting for more than 30% of the total population in Northern Ireland, the over fifties represent a very important and hugely influential collective voice. People don’t stop going out and enjoying themselves when they reach a certain age – indeed the arts and leisure pursuits of many people increase greatly as they get older. This festival reflects the huge diversity of interests and activities that older people do and can enjoy, and I would encourage as many people as possible to come along, meet friends, make new friends, and above all, have a great time.” Joseph Morgan, a member of the Acting Up theatre group commented: “All my life I wanted to do something in drama but I never got the chance and now at the age of eighty five I’m finally doing it. I never thought I’d be going out on stage at the Waterfront at my age. It’s a great feeling.” Supported by Belfast City Council, Imagine Arts Festival takes place at Belfast Waterfront on Saturday 8 and Sunday 9 June. Tickets for festival events and more information available from the Waterfront and Ulster Hall Box Offices, by calling 028 9033 4455 and at www.waterfront.co.uk