<![CDATA[ <p style="text-align: justify;">Community leaders from villages across the Lecale turned up to support Independent Downpatrick Councillor Cadogan Enright’s re-election bid on Tuesday at the official signing and handing in his nomination  nomination papers at Down District Council’s Ardglass Road headquarters.  He is hoping to be one of the 41 councillors in the ‘shadow’ council between Down District Council and Down District Council which becomes Newry, Mourne and Down  Council in a year’s time.

Retired Councillor and local Green Party leader Bill Corry praised Councillor Enright’s work with wildlife and environmental projects since the last local elections and called on local environmentalists to support the re-election campaign saying “for many years past, Downpatrick town and the Lecale coastal villages have elected a cross-community, Independent or green candidate. Councillor Cadogan Enright has been a catalyst for change in Down Council, putting the needs of Downpatrick and District ahead of party politics. I call on voters to ensure we keep an alternative voice to the domination of big parties alive in Downpatrick and along the Lecale Coast”.

Strangford Community Association Chair Diarmuid Riordan said: “Councillor Cadogan Enright has earned a place in the new Council through his tireless work and genuine effort to help and work with our communities. We need at least one of our councillors to be independent, winning his seat by hard work, not just by belonging to one of the larger parties.”

Kilclief Residents Association Chair Maurice Denvir said: “I nominated Cllr. Cadogan Enright for the new Council election on account of his excellent work in Kilclief and other areas locally. Councillor Enright has worked year in and year out for this area, and is the only Councillor we see around here on a regular basis working on the ground”.

Ardglass Development Association Chair Mary McCargo also agreed adding: “Cllr. Cadogan Enright represents a radical alternative to the ‘business as usual’ approach of other politicians in our area and is never afraid to tackle the difficult campaigns that Councillors in larger parties shy away from”.

And local farmers leader Alan Montgomery said: “Councillor Cadogan Enright has made a significant contribution to the economic well-being of farmers in the Lecale area though his work on renewable energy projects and economic development. The farming community needs this work to continue.” 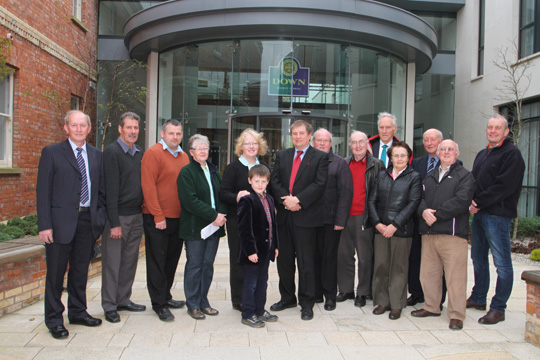 Cllr Cadogan Enright with supporters outside the Down District Council offices.[/caption]