<![CDATA[MILL HILL MILE <p dir="LTR">On Tuesday night last the annual Mill Hill Mile race, promoted by Newcastle AC took place in Castlewellan writes Joe Quinn.   Well it actually took place between Annsborough and Castlewellan, a kind of uphill version of the Cresta run only without the ice. Over 130 men, women and children took part this time in what is undoubtedly one of the stiffest challenges in the racing calendar. What makes it unique is that all ages can do it and often children aged from 5 upwards take delight in leaving their sweating parents struggling in their wake. 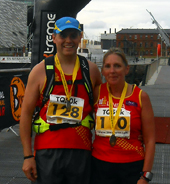 Simon McGrattan and Linda Cunningham at the Ultra.[/caption] Last year Brendan Teer had to concede defeat to Liam Venney within sight of the finish line, but having returned Liam’s trophy he had no intention of returning home without it again. Probably in the form of his life he set off at a cracking pace and was never headed as he reached the top in 5.26, 18 seconds clear of the youthful Ryan Sharkey, Lagan Valley,with Nigel McKibbin Dromore, a further 12 seconds back.  Ryan’s father Frank showed he is still a force to be reckoned with finishing in 6.40 to take the Over 50 prize, just ahead of former East Down junior star Joanne Mills who was first Lady home in 6.44.  East Down ere well represented in the top 20 fiisher with Martin Willcox 8th in 6.07, Barrie Atkinson 12th in 6.11 and Paul Burns 13th in 6.14.

Twelve year old Tim Prenter ran a tremendous race to take 23rd place in just 7 minutes flat over 50 seconds faster than his previous time from 2 years ago before Laura Gardiner was first of the EDAC girls to finish, clocking 7.16, just 2 seconds ahead of her dad Paddy , who was making a rare and long awaited comeback appearance.

So what has made the difference.  Frequent visits to fast food outlets? Hard work and dedication to training? A year older therefore a year stronger?  Well the last option didn’t do it for me – I clocked 10.58 against last year’s 10.47, a bit disappointing as I was targeting 12 minutes, next year perhaps? It has to be the training as all those who improved worked their socks off during the past year and quite simply I vegetated.

There were also notable debut runs from Michael O’ Connor 9.21 taking first in the Age 8 category, and in the same age group a super effort from Jamie McDowell who totally ignored my advice and ran like the clappers to clock 10.05.  Natasha Savage perhaps a little below par on 9.57, while Louisa Byrne posted a commendable 11.13 Sharon Carew 8.31 and Cathy Burke 9.50 were other first timers who could be happy with their times and Elaine Byrne 9.49 knocked half a minute off her previous best.

So the targets gave been set and 2014 awaits – see you all at the bottom in a year’s time!

Only father and son Barrie and Daniel Atkinson had recovered in time to head to Millisle on Wednesday night for the PSC 6 Mile race and 3 Mile Fun Run which was the final round of the Ards Triple series. In the event Barrie finished overall 5th and 1st Over 35 in 35.10 while Daniel was 2nd in his race – a good night’s work all round.

Only one East Down man made it to the start line for the Waterside Half Marathon on Sunday but he kept the club colours flying high with a 1.28.59 timing. Michael McKeown was the man who continues to record consistently good times over the 13.1 miles distance and as ever was a worthy ambassador.

Sunday, the traditional day of rest for many proved anything but for Simon McGrattan and Linda Cunningham who tackled the 50K ultra marathon along the shores of Belfast Lough it was anything but! Simon may have apologised for answering the calls of nature which restricted their running times on the mostly off road route to 5 hours 39 minutes but the only call they won’t want to answer for a while is that of someone asking them to go out for another run.  A tremendous effort by this remarkable pair who have stepped up to another level of achievement.  With several half marathons and the Dublin marathon fast approaching they will certainly have plenty of recovery runs to choose from.  Perhaps they’re eyeing Michael Cultra’s record at the 24 hour race at Mary Peters Track next year?

Whatever, a huge Well Done to both.