Andrew McGrattan 22.88  led the way for the Under-11 boys, taking Gold in the 150 metres sprint, with James Byrne 23.93 impressive in 5th place and also posting 2.19 in the 600 metres and throwing 5.06 in the Shot Putt, an event in which Andrew placed 3rd  later in the evening. Michael O’Connor also ran with great promise in both distances.

In the Boys Under-13 events Matthew McGrattan and Tim Prenter placed 3rd and 4th respectively in the  200 metres with Adam Morgan also competing manfully. Tim also placed 4th in the 800 metres  and 3rd in the Long Jump to complete an impressive night’s work.  In the Under 15 races Own Edwards was 7th in the 200 and 12th in the 800 metres, while Daniel Atkinson and Chris O’Connor were almost inseparable over both distances. 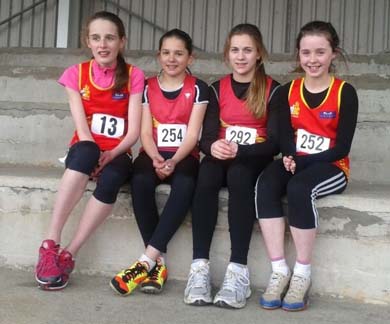 The Girls were not to be outdone however, and Natasha savage set the ball rolling with 8th place in the Under 11 150 metres sprint with Aoife Burke winning the Under 13 equivalent before going on to complete a hat trick in the 600 metres and Shot Putt events. Grace Surginor, Louise Lundy, Miya Rois Gaffney and Lucy Morgan all had their first experiences of the new track on the night and enjoyed the evening together with Beth Watterson who later claimed a superb Bronze medal in the Shot Putt.

Edie Caroll continued her fine season with 8th place in the 200 metres with Niamh Masterson also getting her first taste of track running.

In the Under-15 Girls category Emma Smyth began an impressive series of races with 5th in the 200 metres in 28.12 and  Laura Gardiner was unlucky to lose out on Gold by just over 1 second in the timed trialled 800 metres. Olivia Mooney, Aoife Cochrane and Elisha Surginor were separated by less than 2 seconds overall and Aoife Masterson, Emily Forte, Lucy Prenter, Ella Carroll and Eimear Connor enjoyed trying what was for them unaccustomed distances.

Come Saturday and it was off to Antrim Forum for the first round of the new Youth Development League, formerly the Young Athlete’s League and superb performances by Emma Smyth who won the 200 metres, and was only just pipped for the double in the 100 metres.  She was well backed up  by Emily Forte in the 100 and by Eimear Connor in the 200 before they placed 3rd and 5threspectively  in the Under 15 Long Jump. Olivia Mooney ran well to take 4th in the 800 metres with Laura Green acquitting herself well after  a bout of gastric flu during the week.  Laura Gardiner did well to hold onto 3rd  place in the 1500 metres, though feeling below par and Aoife Cochrane perhaps suffering from the same bug, did well to finish strongly.

While none of the Under-13 Girls appeared the Boys did at least have 2 competitors in the 1500 metres with Daniel Atkinson and Owen Edwards finishing 5th and 6th respectively and Daniel recording a PB earlier in the Long Jump.

Philip Doran made a spirited debut in track athletics, adapting well to the new environment and doing admirably well in the 200 metres and 100 metres sprints.  Tim Prenter unfortunately missed his 1500 metres race due to poor announcing and the puzzling combination of age groups, but nonetheless contributed significantly to the points total with a good showing in the Long Jump and a win in the Javelin.  Matthew McGrattan ran very well in the 800 metres but was superb in the very different 100 metres, just being pipped for 1st place on the line.

In a sense everyone likes to save the best til the end and so it proved on Saturday when a hastily assembled 4 x 100 metres Relay team was sent out to do battle in the Under 15 Girls race. With little time to perfect changeover technique the squad left with the instruction so often ignored by international teams “Make sure you take the baton” ringing in their ears.  And what a response they gave.  Given a magnificent start by Emma Smyth, Emily Forte  held her place on the second leg and  handed over to Eimear Connor in 3rd place and she ran the bend of her life to reach anchor leg runner Laura Gardiner still in 3rd.  With orders in mind Laura made sure she had a good grip on the baton before accelerating away to come home in a magnificent third place, a race which brought everyone to their feet.

So well done to everyone who took part and who had spent a long day on their feet, much of it waiting for their event to come round and then despite that gave their all on the track and in the field.  You should all be proud of your performances no matter where you finished.  Next round is again in Antrim Forum in 3 weeks time.

Next weekend sees the inaugural Downpatrick Lions3 Lakes Charity Races in aid of the Guide Dogs for the blind Association and a big turnout from local clubs is expected.  Races begin on Saturday  11 May from 11.00am at the Lakeside Inn.