Two Saturdays ago, the Bobby Rea Memorial Cross Country race was held for the second year in a row in Kilbroney Park, Rostrevor, where, thanks to the sterling efforts of Newry and Mourne Council and Newry City Runners,  a series of routes had been laid out to challenge the huge numbers who arrived from all directions to compete writes Joe Quinn. 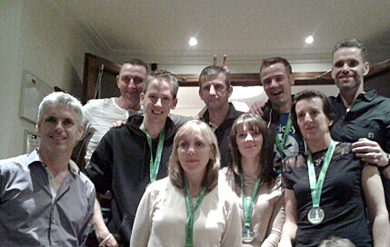 Brendan Teer was involved in a ding dong battle at the front right from the off but his main adversaries were whittled down to two by the half way stage – Letterkenny’s Ciaran Doherty and five times Jimmy’s Ten winner Joe McAlister.

Doherty opened a gap at the start of the final lap and increased his advantage throughout as he powered home while Brendan and Joe slugged it our for the minor places.  First Brendan caught and passed the St Malachy’s man and opened a slight lead halfway through the lap.

But Joe does not  give up easily, if at all, and he was back on Brendan’s shoulder with a quarter of a mile to go, and sprinted away from the  East Down man on the run in to take 2nd with Brendan close behind in 3rd, one place better than last year.  Meantime Neil McCartan  was battling for every place he could get coming home strongly to take 13th spot with the ever improving Paul Burns a splendid 37th with Peter Morgan on his first outing of the season in 77th.

Stephen McCartan 83rd was happy to get his comeback race out of the way. The first 3 finishers only from each team  counted for the Bobby Rea Team prizes and East Down claimed the prize with 53 points, three ahead of City of Derry and 9 ahead of North Down.

LAURA QUALIFIES FOR ALL IRELAND FINALS

The Under-14 Girls team was led home by Laura Green 39th, closely followed by Aoife Cochrane 43rd, Anna Lynn making an eyecatching debut in 53rd , Ella Carroll  62nd and Dionne McEvoy 82nd.  There was a foursome in the Boys Under 14 race with the ever improving Owen Edwards 26th, (71st last year) Tim Prenter 38th (he was 63rd last year) with Christopher O’Connor doing admirably well to take 51st as he continues his recovery from injury and Matthew McGrattan 54th

After a week onstage with the St Mary’s High School production of Oklahoma, East Down’s Laura Gardiner was not feeling much like singing Oh What a Beautiful Morning as she turned out in the Girls under 16 race on a cold, windy and increasingly wetter course.  It may explain her below par performance however but nevertheless, she gave it her All Er Nuthin treatment to take 12thplace and qualify for the All Ireland Championships in Santry Park on 17 November.

The following Monday it was Dublin Marathon day, a now traditional outing for East Down runners on the last Monday in October.

Leading the Dunumians contingent this year was Michael Cultra who must have thought somebody was having a laugh when told he could stop and go home after 3 hours and 12 minutes and a mere 26.2 miles as his last outing was a;most 4 times that distance in 24 hours.

His time was 14 minutes better than last year and he must be a serious contender for a sub 3 hour clocking very soon. Close behind was Declan Teague 3.15 in what was surely his grittiest performance if not his fastest, as he still carries the scars of a recent bout of shingles, which is probably the worst visitor anyone would wish for a month before a marathon.

Brian Donnelly made up for his injury hit bid of last year by cruising to a fine 3.18 with the consistent Michael McKeown just behind in 3.20. Next man home might have been temporarily described as the first of the disappointed, who had an encounter with the dreaded Wall around 21 miles, but held it together to record 3.23.

This is super running but also proof that the marathon above all other events will kick you very hard when you’re not expecting it and declares very clearly that  it will fight for every second – thus the achievement is all the sweeter  when you cross the finish line, no matter the time!

Another PB from Gavin Oakes  whose 3.26 was 3 minutes better than last year and he is rapidly becoming the epitome of even paced controlled running, with a mere 40 seconds difference between his first and second half times.  Literally one to follow.

Another who was cool, calm and collected throughout was Cheryl Denvir, East Down’s first lady, learning on the hoof from master tactician Phillip Vint, as she eased to a PB in 3.28, hardly breaking sweat in the process.

Phillip, another struggling with recent injuries, but completing his second marathon in 10 days, saw the distance out in 3.36, with Jim Erskine evading all my radar traps to record 3.52.

Others we did see were John Findlay 4.01and wife Wendy 4.11, Oonagh Breteche 4.01 with another of the initially “disappointed” James Magennis 4.05.   Linda Cunningham completing her 7th marathon of the year and Simon McGrattan, who used the excuse of cramp to stop outside a well known coffee shop at mile 24, was sorely disappointed when all he got was a rub down and a finger to point the way to the finish, were both credited with 4.28.

A special word as ever to this year’s first timer, Shirley-Anne Thompson, who paced it magnificently to record a superb 4.50. What a boost it was to see her appear through the ranks of runners at mile 24 smiling through the pain.

Great performances too from Billy Logue, Gerard and Jane Rowe from Murlough and Jerome McCrickard from Newcastle AC who dug deep to record a superb 3.02 and indeed to everyone from this area who rose to the challenge.

I can assure you that no matter what your times and whether you’re pleased, angry or disappointed with your performance I would give my right arm to have recorded any of them. Enjoy your achievement.

After over six weeks inactivity I felt it was time get out and about, and while I hesitated to say it was time to hit the road again, it was.

So on Sunday morning I went out on the bike and am happy to report that I survived unscathed and can claim to be an active sportsman again. I would like to express my thanks to everyone who sent gifts, cards, telephoned or asked after my well being in any shape or form. I owe a huge debt to my wife and family but am indeed blessed with so many good friends in our Club and beyond. I can assure all of you that good wishes really do make a difference in aiding recovery. Thank you.

On 24 November local interest will focus on Raholp where this year’s Round the Griddle 10K and Fun Run gets under way at 12 noon from Saul GAC premises.