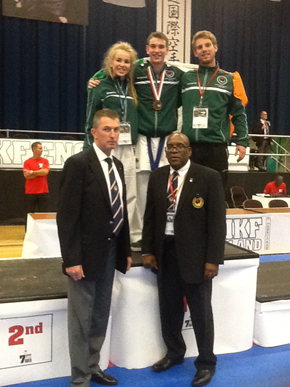 DUNDRUM’S Mairead and Rory Kavanagh both won bronze medals at the WIKF World Karate Championships at the K2 Sport Complex, Crawley in Surrey at the weekend.

Mairead after being very unlucky in her age and weight category went on to win her bronze medal in the team event for her age category. While Rory, competed in the male -67 kg category. Rory won his first fight against an opponent from the Netherlands 4-2.

He then went on to demolish his next opponent from Belgium 8-0.  It was a competitor from Denmark who eventually put Rory’s hope of a world gold medal to bed.

It was a very closely fought semi final with the scores drawn at 4-4 when in the dying seconds Nymand Marcus from Denmark scored with a three point technique denying Rory a place in the final.

Madeline McCusker and Ryan McEvoy from the Downpatrick club also competed. Madeline won through to the second round in her category but was then beaten 2-0 in a very closely fought second round. Ryan was very unfortunate and didn’t make it through the first round after being pitted against a very strong Danish competitor.
A total of eight competitors from The North were selected to compete, four of whom were from the local karate club in Downpatrick Leisure Centre and the other four from clubs in Bangor, Newtownards and Belfast.
]]>