<![CDATA[ <p style="text-align: justify;">A major step forward in the development of the local government administration hub in Downpatrick took place on Friday 3 May 2013 when DOE Environmeent Minister cut the ribbon to officially open the new Down District Council £11 million facility.

Minister Attwood said he was deeply impressed with the approach that Down District Council had taken to blending the old historic built heritage with a new extension to create a very modern administrative centre and work environment. 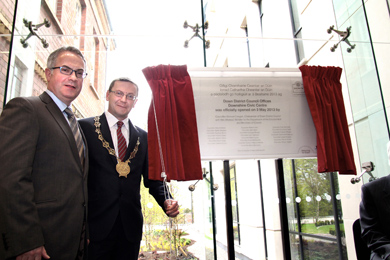 Environment Minister Alex Attwood and Down Council Chairman Mickey Coogan unveil the plaque at the official opening of the new Downshire Civic Centre in Downpatrick.[/caption]

Located at the former old Downshire Hospital estate in the county town, the new facility is now home to Down District Council and the Northern Ireland Housing Executive; and will soon include the Northern Ireland Fire and Rescue Service. The South Eastern Health and Social Care Trust continue to deliver patient and administrative services from the historic Downshire Estate.

The Police Service of Northern Ireland has commenced work on its site to develop a new divisional police headquarters.  Centralising all these public services in one location is designed to benefit local people and create efficiencies.

It is hoped that the new centre will be a key hub in the new South Down council administration when the Review of Public Administration joins the current Down and Newry based councils in two years time into one ‘super’ council.

Addressing the guests from the business, community, political and church sectors at the opening ceremony, Councillor Coogan said: “I am delighted by the success of the new Downshire Civic Centre so far.  This landmark development will bring together five community partners with the aim of delivering efficient, high quality public services that are responsive to the needs of people throughout Down district. 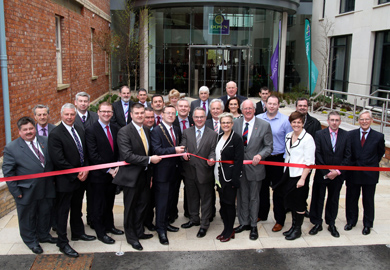 Environment Minister Alex Attwood and Down Councillor Mickey Coogan, Chairman of Down District Council, cut the ribbon to open the Down Civic Centre. Included are MP’s Maragaret Ritchie (SouthDown) and Jim Shannon (Strangford) and South Down MLA’s and councillors from Down District.[/caption]

“This innovative model for the delivery of public services will create savings for the ratepayer and will ensure key partners work more closely in delivering quality services.  The completion of this project, is a great example of what effective and committed partnership working can achieve.”

He added: “It is beyond anything I expected to see and people will look back on this with pride.  This facility was supported by all parties who knew the value of what was being achieved and the dedication to make this happen.  Everybody should be really proud of it.  We have an iconic building with excellent facilities all under one roof, offering the citizens of Down district opportunity and support – for which this community is most grateful.

“It is so encouraging to see the idea of this new centre, first conceived in 2002 come to fruition. This building is an example of public sector organisations working together.”

“Down District Council is committed to supporting projects that strengthen infrastructure and advance long-term economic opportunities in our communities,” said Councillor Coogan.  “Our investment of £11 million is supporting existing community and business requirements in Down district and improves our area’s ability to attract further development in the future. 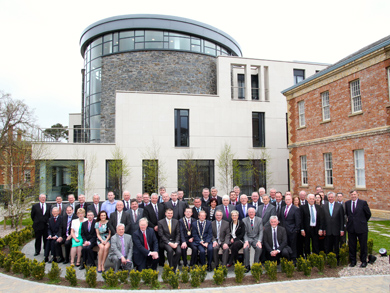 The opening of the new Down Civic Centre was attended by political representatives from across County Down.[/caption]

“On behalf of all the Members of Down District Council, I wish to express our heartfelt gratitude to everyone who has collaborated to make this great day a reality.”

Councillor Colin McGrath, Chair of the  Down Administrative Centre Project Board said he is proud of the new building, and added: “The Civic Centre provides a new civic focus for the people of Down district and a modern efficient and flexible working environment for our staff.

“The move to our new offices provides the staff and members of Down District Council with up-to-date facilities, aiding them in their efforts to provide a better service to the people of Down district.  Although we have just moved a little over six months ago, we are already seeing the benefits in terms of efficiency and building relationships with our partners. The Civic Centre is full of energy and optimism and I would like to thank everyone involved in the project and all the staff who have migrated to the building.”

Minister Alex Attwood said: “It is an honour to officially open this building today.  Without doubt, Down District Council has been visionary in retaining the history of this old building when delivering accommodation fit for the twenty-first century.  I commend the Council for the environmental considerations undertaken during its design and construction, and also the local employment created. 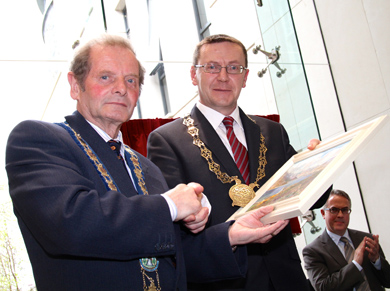 “The local government sector is currently going through a major period of reform in order that citizens receive more efficient and effective services that are tailored to local needs.  The redevelopment of this site, its positive impact on local jobs and businesses, the partnership working with other public service providers and the resultant benefits all this will deliver to the Council’s ratepayers and wider communities, is very much in the spirit of what the local government reform programme aims to achieve.”

South Down MP Margaret Ritchie also addressed the guests and said:  “Today’s official opening of this stunning Civic Centre marks a significant development in the history of local government not only in Down district but across Northern Ireland.  This Civic Centre is the lead-anchor tenant in Northern Ireland’s first ever public sector campus, a modern and pioneering approach to delivering public services.  This purpose-built local government administrative centre will play an important role in retaining and attracting jobs, and investment, in Down District.

“I hope potential investors to our district see in the Downshire Civic Centre a reflection of the dynamic, forward-thinking spirit of the people of this district.  It stands as a representation of the solutions to the challenges of delivering public services in an accessible, joined-up and efficient manner. Councillors and staff will welcome moving to an up-to-date, fit-for-purpose working environment. All those involved in this project from start to completion deserve our appreciation and congratulations.”

Strangford MP Jim Shannon also commented: “This move will I am sure only enhance the smooth running of Council and these facilities are something to behold and something to be proud of. This is almost a one-stop shop for most needs in the community and it will certainly provide a modern and effective base for so many services, huge congratulations to all of those who played a part in providing this new Council – your time has been well spent and you should be proud.”

Down District Council Chief Executive, John Dumigan said: “The move to the Downshire Civic Centre provides a good opportunity for our staff to work more closely with other bodies.  Council staff have been building professional relationships and developing a joined-up approach with people from health, housing and fire and rescue services, to name but a few.  Indeed, the entire development will soon become a ‘one-stop shop’ for the district.  This will directly impact upon those people who use our services, with a view to providing the very best response to individuals and the communities in our district.  The move to the new building will provide better value for money.  Through integrated working with partners such as health and housing we can create a public sector for the future, which is more efficient and delivers services at a lower cost.”

Mr Dumigan told those present that the new building is not just for the people of Down District but will be for the people in the district of the new Council.  He also said that it is a “statement of commitment to local government.” and added “It is well designed, very progressive and a signal that Down District Council is a proactive organisation.  It is a good example of modern services being brought to the community.”

Mr Dumigan concluded the official event stating that the opening of the building marked an important milestone in the provision of improved local government services to the people of Down district and brought the Council into a new era with its new modern surroundings.

Final thanks were extended by Mr Dumigan to Down District Council for its funding commitment of £11 million.  He also paid tribute to those Council officers led by Marie Ward, Group Chief Building Control Officer, whose commitment ensured the completion of such a major project.

Councillor Coogan and Minister Attwood then unveiled a plaque to mark the opening event before finally cutting the red ribbon and declaring the building officially open.

Young musicians from Secondary Schools across the district took part in the official opening celebrations, and Councillor Coogan said: Today is one of celebration for Down district, co-operation and achievement and I have no doubt that these young people of our district will remember this as a day of great joy as we officially open this new Civic Centre.”

Elected Members and the Corporate Management Team of Newry and Mourne District Council, Mr E K McGrady former MP for South Down, MLA’s, councillors, business, community, education and church representatives all joined Council staff  to celebrate the official opening of the Downshire Civic Centre, a modern and environmentally designed facility that will contribute to the district’s economic and social development.  Those present also included former elected members of Down District Council, former Chief Executives and Directors, the design team and the contractors who were involved in the delivery of the innovative project.

Almost 200 guests went along to see the red ribbon cut before being given a tour of the new building.

The Downshire Civic Centre boasts ample parking space in a mature wooded garden setting; a local registry for births deaths and marriages; three conference suites; and six meeting rooms all equipped with the required technology for business meetings and conferences.  A further six business spaces will be let out in the near future and there are plans for a cafe also in the centre. The Council is keen to make its meeting and conference facilities accessible for public use.