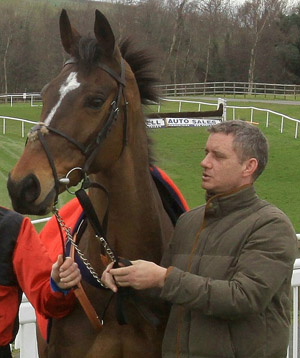 Warne was a winner at Aintree pictured with Downpatrick trainer Brian Hamilton.[/caption]

The top chaser as detailed in DOWN NEWS a couple of weeks ago was sold in a private transaction to leading English owner/rider, Sam Waley-Cohen to ride in the Foxhunters and duly supplied a third victory in the “Amateurs Grand National” for the rider.   Warne set off in front closely followed by favourite Mossey Joe, however, the local horse was six lengths clear at Beechers and travelling well and jumping superbly.

After Valentine’s Brook Warne was fifteen lengths clear of the field.  Mossey Joe attempted to close the gap at the penultimate fence but soon faded as loose horses slightly hampered Warne in front and it was last year’s winner Tartan Snow with Irish Champion rider Derek O’Connor aboard which emerged as the main danger.

But the Hamilton horse had the big race won jumping the final fence and galloped strongly to the line.  Sam Waley-Cohen was fulsome in his post-race praise for the Downpatrick trainer saying:  “Brian has done an amazing job with him, getting him ready for today and the horse was spot on.  He [Warne] was fantastic – I thought I might be doing too much in front and wanted to get a breather into him but he did not need it and galloped strongly to the line.”

Brian Hamilton,  a former Ulster Region Champion rider before turning to training, added: “ I’m over the moon and thrilled it all came together for Sam and his father on the day and the horse did everyone proud, especially the manner of his win.  That was something else today but he is definitely a better horse this year – I know from the way he has been working at home”

The former owners, the Magill family,  were represented in the winners enclosure by brothers Peter and Paul who were the first to congratulate Sam Waley-Cohen and said: “ The best day of our lives – the Waley-Cohens own him now but we are just as excited and thrilled by the win and the way the horse won.”

The Waley-Cohen family have a long association with national hunt racing and Sam partners Cheltenham Gold Cup winner, Long Run in Saturday’s Grand National. However, the family lost their youngest son, Thomas when aged 20 in 2004 and with no trophy for the Aintree Foxhunters supplied the trophy if memory of Thomas while the saddle cloth used by Sam has Thomas’ name embossed on it.