<![CDATA[THIS March a student from Co. Down will be flying off to New York for a week of political discussion in the United Nations building, along with 5000 other young debaters from over 100 countries. [caption id="attachment_35228" align="alignleft" width="390"]<a href="http://www.downnews.co.uk/wp-content/uploads/2013/01/UN_2.jpg"> 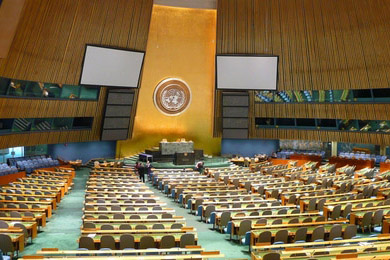 The UN conference chamber in New York.[/caption] Patrick Brown (20) from Downpatrick is one of the students selected through the United Nations Association (UNA) of the University of Sheffield to represent his university in what is the most prestigious event of its kind… the New York Model United Nations conference. Only 50 students have ben selected from across the UK and he will be traveling there with student colleague from Sheffield University, Daniel Saunders from Dromore who is studying chemical physics. When asked to describe exactly what a Model United Nations (MUN) conference was, Patrick, who is in his second year studying politics, said, “It’s a chance for young people from all areas and backgrounds to come together and debate on global socio-political issues. These can range from poverty eradication in Africa to the proliferation of nuclear weapons in North Korea. The idea is to conform to UN standards of debate and employ diplomacy and public speaking to pass resolutions favourable to your allocated country. It teaches skills of analysis and objectivity.” Patrick, a former pupil of Shimna Integrated College in Newcastle, ran for a Council seat in the Local Government election for the Alliance party in May 2011. He is passionate about local issues, and started taking part in model UN’s in October. He hopes to learn valuable skills in New York which could potentially benefit him in a future career. This will be Patrick’s fifth trip to the US and so far he has had trips across Europe, Australia, Hawaii, and visited 14 states in the US. He has visited New York three times already. “I love traveling as it certainly opens up the mind,” he said. “I want to get a good degree in politics and these type of experiences will help me develop a broader view of life than if I just stayed in Northern Ireland.” The South Down Alliance Association were delighted to hear of Patrick being selected to go on the New York trip. An Alliance  spokesperson said: “as a promising young member of the Alliance Party NI, we are very pleased to see Patrick developing his political skills on the international scene.” [caption id="attachment_35226" align="alignright" width="250"] 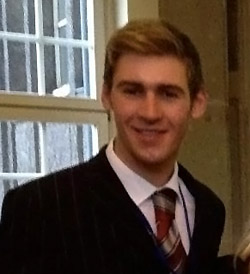 Downpatrick student Patrick Brown is off to the United Nations in March.[/caption] Patrick’s trip has been sponsored by Trackars Homecare and Nursing Services. Founder and owner of Trackars, Patricia Rysberger, said: “Our mission is to promote independence, dignity and safety for each of our clients/patients. This originated primarily from the United Nations Human Rights charter based on respect for the principle of equal rights and self determination of peoples. Hence Trackars are delighted to sponsor Patrick Brown at MUN recognizing and working with international social and economic issues.” Patrick is one of eight of the University of Sheffield delegation, and was selected by a committee from the UNA based on his aptitude for debate, diplomacy and team work. He will debate with 5000 other future leaders, lawyers and lobbyists from across the world. Only 50 students have been selected from the UK. In the past this UN conference has attracted speakers such as Secretary of State Hilary Clinton and current Secretary General of the UN, Ban Ki-Moon, and is certain to produce exciting outcomes, with all attendees debating from 9am-10pm all day and usually working well into the small hours of the morning perfecting and promoting ‘draft resolutions’ which outline a particular countries opinions and goals on the given topic, and are always coherent with UN law. Patrick said: “The aim of the conference is for the speakers to convince the other debaters to pass your resolution. This is no easy task in a room of 100 other people who like to talk a lot. The University of Sheffield’s delegation will be representing the interests of Nepal in New York and Patrick feels they are ready for the challenge, although there is one downside… we are arriving in New York on St. Paddy’s Day and have to go straight into a debate all afternoon!” As a trip to New York does not come cheaply, Patrick has been encouraged to seek sponsorship from local businesses who may benefit from future advertising, both within local press and at Model United Nations conferences. Please e-mail paddyb1321@yahoo.com  if you are interested and can support his trip to the Model United Nations conference.]]>