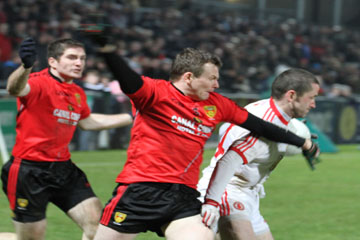 Down Defender Daniel McCartan wards off Tyrone’s Stephen O’Neill.[/caption] Tyrone were still celebrating their Power NI McKenna Cup win and Mickey Harte’s squad came to Pairc Esler to continue the run of good fortune and form. But it was a rather nervous Tyrone that started the game getting quietly pummelled in the fist 15 minutes by Down players with Donal O’Hare notching two frees, Benny Coulter taking two points in action, and Connaire Harrison firing a long shot over the Tyrone posts. This match proved not to be a great spectacle of football but a tough, physical, niggly contest with plenty of heavy tackles, some too high, making life more difficult for referee Barry Cassidy. Down manager James McCartan had included a number of new faces in the side this season and in the first half Down showed a number of strong passing moves with the ball from wing to wing attacking Tyrone and holding good possession, but there were a number of mis-passes which put an end to what could have been an overwhelming assault on the visitors. [caption id="attachment_36094" align="alignright" width="300"] 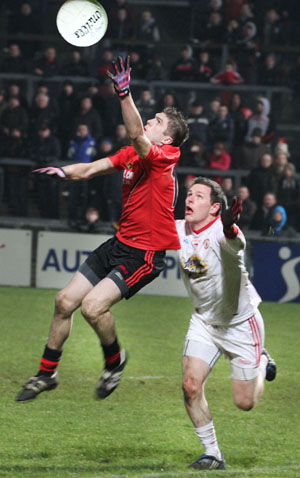 Down came out fighting against Tyrone and took an early lead[/caption] Ryan Mallon made a good volley from a distance half way through the first half just missing his point and this showed that Down were trying to seize the opportunities. This was then followed by Ryan Boyle firing a shot wide of the Tyrone posts. As the first half unfolded, Down were showing their tenacious side battling against Tyrone and staying a couple of points in front on the scoreboard. Then Benny Coulter had his best but short spell of the match when he made a quick break but shot wide followed by a couple of other good combined forward line bursts.  It was Down who were getting in the shots at goal but the wheel turned and  in the last ten minutes of the first half, Tyrone raised their game wanting to end the half on better terms. Their ace kicking goalkeeper Niall Morgan started the comeback for Tyrone when he put one over the Down posts from 45 yards, and this was followed by a wide a short time later. But as Tyrone pushed forward, the game became challenging for referee Cassidy to say the least and the first yellow was meted out to Down’s Justin McMahon as Tyrone fought to claw back the points in a match peppered with off-the-ball incidents. Tyrone received a hugh boost when just seconds into the second half their captain Stephen O’Neill received a through ball down the middle and burst through kicking over the Down posts. But the real turning point of the match for Tyrone came in the 48th minute when in a scramble in the Down goal area Tyrone’s Mark Donnelly hammered in a goal to set the match alight after sustained Tyrone pressure. But within two minute Down had cancelled this effort catching the visitors on the hop with a strong attack as Donal O’Hare palmed in a pass from centre forward Connaire Harrison into the Tyrone net. The score was now at 1-08 apiece and all to play for. 20 minutes into the second half as Tyrone were creeping ahead on points piling on the pressure on Down with strong counter-attacks, and gradually the play rested mostly in the Down half making it difficult for the home side to press home an attack to get back the couple of points they had lost to Tyrone. The Tyrone defence in the second half certainly sharpened up their game and were not taking any prisoners. [caption id="attachment_36095" align="alignleft" width="390"] 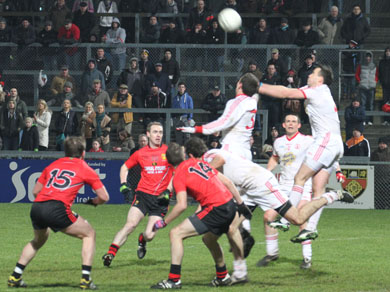 Action in the first league clash between Down and Tyrone in the Allianze League Division 1.[/caption] As time slipped by for the Down team, it was Tyrone keeper Morgan’s kicking which kept the pressure on Down from long frees. Down’s Connaire Harrison and Ryan Kelly had a few fine attacking moves against Tyrone defence, but it all seemed to drain away from the Down team when Tyrone’s Stephen O’Neill sent a long free from the right over the Down posts. The Tyrone central defender Joe McMahon was red carded for an off-the-ball incident but Down still could take full advantage from this as Tyrone seemed unfashed by the loss. Down did make a late charge and Conor Laverty was then sent off in the dying embers of the game. Down made one final bid to get an elusive goal, and it was Down’s Aidar Carr surrounded by six Tyrone players in the goal area who summed up his team’s performance… close but so far away.  Down were gutsy, at times creative, but just a shade behind the more determined Tyrone visitors. There was little between the two sides and the Down crowd were pleased with the display of football despite their side being vanquished once again by Tyrone. Macartan’s efforts to hammer out a new Down team of men of steel at the anvil of Pairc Esler may yet prove successful as the Allianz League progresses. Down will have learned much from this narrow defeat. Down: Michale Cunningham, Damian Turley, Daniel Macartan, Ryan Boyle, Ryan Mallon, Aidan Carr, Darren O’Hagan, Kalum King, Kevin McKernan, Keith Quinn, Mark Poland, Brendan Counter, Conor Laverty, Connaire Harrison, Paul McComiskey. (Subs- Brendan McVeighm Owen Costello, Peter Tumelty, Conor Gough, Arthur McConville, Donal O’Hare, Gerard McNulty and Ryan Kelly. Tyrone: Nial Morgan, Aidan McCrory, Conor Gormley, Cathan McCarron, Ryan McKenna, Joe McMahon, Ryan McNamee, Plunkett Kane, Sean Cavanagh, Kevin Gallagher, Peter Harte, Matthew Donnelly, Conor McAlliskey, Stephen O’Neill and Mark Donnelly. (Subs – John Devine, Conor Clarke, Jonathan Lafferty, Danny McBride, Tiernan McCann, Justin Mc Mahon, Patrick McNeice, Ronan O’Neill, Martin Pentrose, Barry Tierney and Sean Warnock.          ]]>