<![CDATA[THE  flag is flying half-mast at Down District Council following the death of a well-respected, long-serving former MP, Mr E K McGrady. Eddie McGrady (78), a former Down District Council Chairman, Councillor, MLA and Member of Parliament for South Down, passed away in hospital on Monday 11 November after a period of illness. [caption id="attachment_44599" align="alignleft" width="360"]<a href="http://www.downnews.co.uk/wp-content/uploads/2013/11/ek-mcgrady-condolences.jpg"> 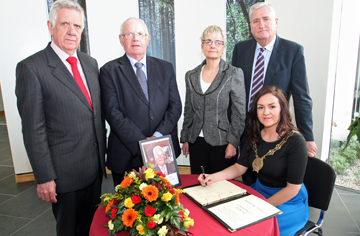 Chairperson of Down District Council, Cllr Marie McCarthy, signs the book of condolence for EK McGrady, former local councillor and SDLP MP for South Down. Pictured are John Dumigan, Down Distict Council Chief Executive, Cllr Patsy Toman, South Down MP Margaret Ritchie, and Cllr Eamonn O’Neill.[/caption] He was a founding member of the SDLP.  Mr McGrady was elected to Westminster in 1987 when he defeated the sitting MP Enoch Powell, then an Ulster Unionist.  He stood down in 2010. He was a former chairman of the party, a huge supporter of the peace process and well respected by all political sides in Northern Ireland. Down District Council Chairman, Councillor Maria McCarthy has expressed regret on behalf of all citizens of Down District  on hearing of the death of Eddie McGrady. On Tuesday 12 November, Down District Council Chairperson, Councillor Maria McCarthy formally opened a Book of Condolence at 12noon in the Council’s headquarters at the Downshire Civic Centre, Ardglass Road, Downpatrick and said: “Eddie McGrady was the epitome of a true public servant. Hardworking, honest, dedicated. A man of great faith and character. “Eddie was a true democrat and instrumental in the Good Friday Agreement. A political giant. A titan of both local and regional politics. “On a very personal level he was good friend and confident. He was much loved and will be sorely missed.” Books of Condolence are available for signing by members of the public at the following Council buildings, and they will remain open until Friday 29 November 2013. *   Down District Council Headquarters, Downshire Civic Centre, Ardglass Road, Downpatrick: Monday – Friday, 9am – 5pm *   Down Leisure Centre, Market Street, Downpatrick – normal opening hours *   Newcastle Centre, Central Promenade – normal opening hours *   Ballynahinch Community Centre, Windmill Street – normal opening hours The Books will then be sent Mr McGrady’s family on behalf of the citizens of Down District. Down District Council Chief Executive, John Dumigan, added his condolences on behalf of the Management and Staff of Down District Council and said:  “Eddie gave over 50 years of his life to serving the people of South Down and it was a great honour and privilege for Down District Council to have paid tribute to Mr E K McGrady for all the hard work he has done serving as the MP for South Down over the years.  At this very sad time, I wish to extend our condolences to Eddie’s family.”]]>