<![CDATA[ <div style="text-align: justify;"> The Donard Fundraising Group has no intention of taking things easy in 2014. A range of good causes are set to benefit from the fundraising activities the group plans to undertake. Last year the small but dedicated group of charity volunteers raised  a fanrastic sum of over £21,000. [caption id="attachment_47598" align="alignleft" width="390"] 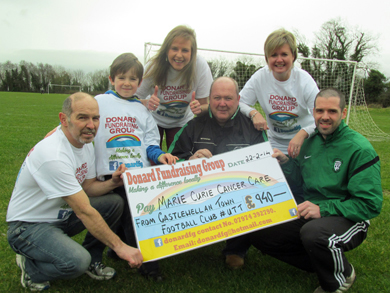 Donard Fundraising Chairman Paul Madden and his son Raphael with volunteers Jacqui Mason and Kate Pell accept a cheque for £940 from Catlewellan Town FC representatives Ben Corrigan and Conor Stratton. The Club raised the money from a recent ‘Night at the Races’ and through ‘Movember’ sponsorship when club and team members grew beards and moustaches.[/caption] Jacqui Mason, one of the hardwired, dedicated, fundraising volunteers, said:  “The local Donard Fundraising Group are delighted to announce that, as well as continuing to help and support Marie Curie Cancer Care through the group’s innovative and unique fundraising concepts and events, we are also going to help Mind Your Mate & Yourself (MYMY), as one of our chosen good causes in 2014, “And in our endless effort to help as many people as possible in our area, the group are endeavouring to raise money also to fund and provide publicly accessible life-saving heart defibrillators for our local towns and villages this year and in the future.” The Donard Fundraising Group’s Chairman Paul Madden added: “Last year, due to the fantastic kindness and generosity of the general public and every local business, club and organisation we approached, our small group of volunteers raised over £21,000 in less than six months.  Our Donard Fundraising Group, like many other families, has sadly felt the devastating loss and impact of losing a loved one to suicide – which regrettably, is all to0 prevalent amongst young and old alike nowadays.  This is the reason why we believe it is equally important for the Donard FG to try and help MYMY as our designated small localised organisation this year. “MYMY is focused on helping people raise self-esteem, self-awareness and self-care, which ultimately results in respect for oneself.  In today’s society, some individuals struggle on a daily basis with a range of issues; including bereavement, financial concerns, relationship problems, sexuality etc. [caption id="attachment_47596" align="alignright" width="290"] 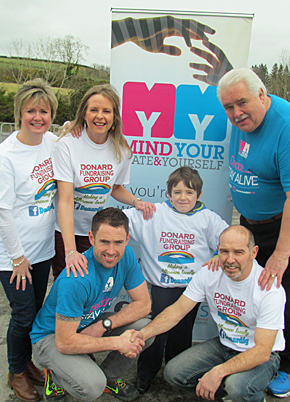 Donard Fundraising Group Chairman Paul Madden (front, right) volunteers Kate Pell, and Jacqui Mason and young helper Raphael Madden, welcome the news that the group, as well as continuing their support for Marie Curie Cancer Care, will also be lending their support to the local Mind Your Mate & Yourself (MYMY) organisation, represented here by Ray Cunningham and Danny Wallace.[/caption] “Therefore MYMY can act as a stepping stone to other organisations such as PIPS (Public Initiative for the Prevention of Suicide and Self-Harm) and Lifeline; it can also provide access to independent financial advice, counselling services, self-development workshops, complementary therapies, nutritional guidance and many other services”. The Donard Fundraising Group is also aiming to raise funds for publicly accessible life-saving heart defibrillators for local towns and villages.  “We believe this is crucially important in view of the recent cuts to our A&E services and opening hours, so that in the event of anyone suffering a cardiac arrest, they can benefit from this life-saving device during the critical time a patient waits for an ambulance or medical intervention to arrive.  In Northern Ireland each year, over 3,500 people suffer a heart attack, approximately 10 people per day.  If we can help to save lives locally with publicly accessible defibrillators, then our group’s volunteer endeavours and work will be humbly and richly rewarded.” The Donard Fundraising Group thanked the Chairman of Castlewellan Town FC, David Hutchman, and its management, committees, players and supporters for their ongoing and invaluable support and partnership of the local Group.  Paul Madden said: “We extend our gratitude to the Club for the magnifcent fundraising donation of £940 for Marie Curie Cancer Care which was raised through a sponsored beard/moustache grow and ‘Night at the Races’. “All of this will fund and provide an additional 47 vital and dignified hours of palliative nursing care, for anyone in our local area suffering from cancer or a terminal illness.  They also thank the proprietors of Mulholland’s Bar and everyone who participated, supported and worked so hard during both of these extremely successful fundraising ventures.” The Donard FG can be contacted by tel/text 07974 392790 or 07599 809280; email: donardfg@hotmail.com or on its new Facebook/Donard Fundraising Group page – where any new ‘likes’ would be much appreciated to help the Group in its aim, to help as many local people/good causes as possible by Making A Difference Locally.