<![CDATA[MEMBERS of Down District Council’s Disability Awareness Group, at its meeting on Thursday 7 February, looked through the eyes of a guide dog to see how the design of street furniture can affect a visually impaired person. [caption id="attachment_36349" align="alignleft" width="390"]<a href="http://www.downnews.co.uk/wp-content/uploads/2013/02/DAWG_ddc.jpg"> 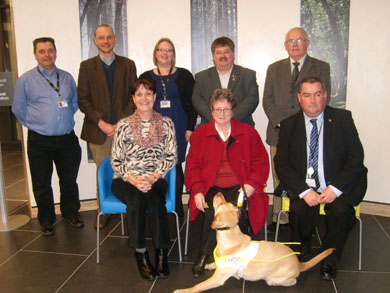 The Down Disability Working Group with Pauline McKenna, centre front.[/caption] Arlene Verner, from Guide Dogs for the Blind Association, highlighted the difficulties caused by misplaced pavement, advertising boards, chairs and tables and described good practice needed when positioning street furniture such as public seating and bollards. Pauline McKenna, who is visually impaired and uses a guide dog, highlighted the problems cars parking at dropped kerbs and on the pavement can cause to both her guide dog and herself whilst out and about in the district. Members also received a presentation from Michael Lormier on the work of the Inclusive Mobility and Transport Advisory Committee (IMTAC) in addressing issues that affect the mobility of older people and people with disabilities. He also spoke of how IMTAC work closely with Translink, other transport providers and stakeholders such as the Consumer Council with particular focus on public transport, the pedestrian environment, driving and parking issues, taxis/community transport and sea/air travel. Chairperson, Councillor Carmel O’Boyle thanked both Arlene Verner and Michael Lormier for their presentations and added: “The Group will be looking at ways they can work more closely with both the Guide Dogs for the Blind and IMTAC to address these problems. We would ask people to give a little thought to the positioning of advertisement boards, bollards and other street furniture to ensure they do not cause problems for people with disabilities.” Councillor Terry Andrews, Vice Chairman, further added: “The presentations have shown the difficulties that exist in the public environment for people who are visually impaired and the good work being undertaken to address these issues.” He finished by commending both organisations for their work in these important areas.]]>