<![CDATA[ <p style="text-align: justify;" align="center">FIVE schools in County Down have been selected to receive life-saving defibrillators as part of the 2013 World Police and Fire Games (WPFG) legacy. 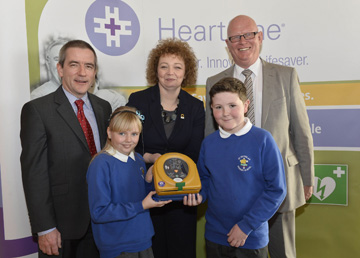 The devices, manufactured by Belfast company HeartSine Technologies, were presented to representatives from the selected schools by Sports Minister Carál Ni Chuilín at a special ceremony held at Stormont.

Speaking at the presentation of the defibrillators, Minister Ní Chuilín said: “The World Police and Fire Games were a landmark event, which saw 7000 competitors from 67 countries competing in 56 sports. Add to this the tens of thousands of spectators, 3,500 volunteers and numerous support staff and you have a sporting celebration on a grand scale.

“After the event, the focus turns to the legacy and how we can use the momentum of the Games to make a positive impact on people’s lives – particularly in areas of deprivation and social exclusion. 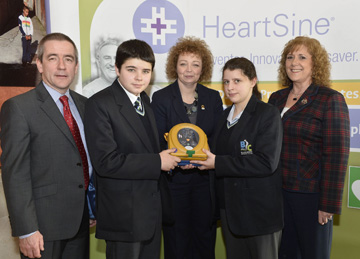 “That is why I welcome this initiative, which sees a potentially lifesaving piece of equipment given to schools. It is a positive development for those at the schools, and their wider communities.

“I would like to thank HeartSine Technologies, who manufactured the defibrillators, for their support during the Games, and for this important contribution to the legacy.

“It is impossible to predict when a Sudden Cardiac Arrest (SCA) may occur. What we can do, however, is prepare best as we can. While I hope this equipment never has to be used, it can make the difference in a potentially life-threatening situation.”

Seamus Murray, Director of Business Services at 2013 WPFG Ltd. said: “In August we celebrated the Games and its success, today we are able to continue that success through our legacy work with one of our key sponsors, Heartsine.

“The involvement of schools in the Games was one of our key priorities, to see so many of those schools here today from right across Northern Ireland receiving their defibrillators is tremendous. These will be of great benefit to the local school and surrounding communities.” 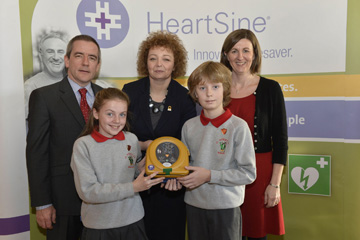 The judging panel was made up of representatives from HeartSine, WPFG and the Red Cross, which will provide free AED training in 2014 to all schools selected to receive a defibrillator.

Paul Gilchrist, teacher from St. Nicholas Primary School in Ardglass said: “We are truly delighted and assured that this device will bring extra comfort and security for those within our schooling community. It is truly a very worthwhile initiative and I would encourage all public bodies to get one.”

Sean Mc Kinley, Principal at Grange Primary School, said: “The device will bring considerable reassurance to all members of our rural school learning community.” The Principal of St. Macartan’s Primary School, Audrey Watson added: “As a small school with excellent sports facilities, we are a hub for the local community. The Gaelic club, soccer teams, parents and wider community use our facilities in the evenings and during the summer months. This piece of life-saving equipment will bring an added sense of security to those user-groups as well as to the regular school staff and pupils.”

Principal of Blackwater Integrated College, Dr Olwen Griffith, also commented saying: “We are delighted to receive this as it has the potential to save lives in our College, and across the local community. 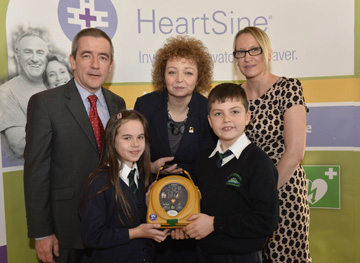 “We at the College have always been pro-active in looking after the health of our staff and pupils, and this defibrillator is a further indication of our commitment to the wellbeing of our community.

“I’m also delighted that the pupils who interacted with the athletes from the World Police and Fire Games will be able to look upon this device as it takes pride of place in our reception; it further cements the legacy of a memorable sporting occasion for the province.”

And the Principal of St. Patrick’s Primary School in Saul, Mark McGrath, said: “Being successful in this campaign will have such a benefit for not only our school, but the surrounding community of Saul & Raholp.

“The defibrillator should mean we are able to cope with any serious situations in school. The defibrillator will also be available for any member of our community to access if required. The legacy of the WPFG will certainly be appreciated in St Patrick’s Saul.”

Declan O’Mahoney, Chief Executive of HeartSine Technologies, who are the only company to design, develop and manufacture AED’s in the UK or Ireland, also said: “We were delighted to initially provide 45 defibrillators to the Games venues, and even more delighted to have been involved with such a fantastic legacy programme which has allowed us to distribute our lifesaving devices to a number of schools within each of Northern Ireland’s five Education and Library Boards.

“I would like to thank all of the schools who took the time to support this initiative because in backing this campaign and getting an AED, the schools are supporting their local community who will have access to the defibrillator as well.

“Around 270 people die from Sudden Cardiac Arrest (SCA) every single day in the UK.

“If someone suffers SCA and is treated with Cardiopulmonary Resuscitation (CPR) alone, survival rates are less than 5%.

“If, however, you combine CPR with the use of a defibrillator, then the rate of survival can increase to over 70%, so the immediate presence of an AED to save more lives and fight against SCA is crucial.”

Paula Powell, Community First Aid Manager from the British Red Cross, which will be providing training for up to 15 members of staff from each of the schools receiving a defibrillator, explained that “Defibrillator training is a great opportunity to try out the equipment and become familiar with the device. It also gives people the confidence to get involved in an emergency situation.”

Key facts to know about the defibrillator and heart attacks.

*   The process emergency departments use to treat cardiac arrest is known as ‘The Belfast Protocol’ as the world’s first out-of-hospital defibrillator was developed in Belfast in the 1960’s.

*   The chances of surviving Sudden Cardiac Arrest (SCA) decrease by 10% for every minute a defibrillation ‘shock’ is delayed.

*   With CPR alone survival rates after an SCA are less than 5%, when CPR is combined with the use of a defibrillator, survival rates increase to over 70%.

The British Red Cross helps people in crisis, whoever and wherever they are. We are part of a global voluntary network, responding to conflicts, natural disasters and individual emergencies. We enable vulnerable people in the UK and abroad to prepare for and withstand emergencies in their own communities. And when the crisis is over, we help them to recover and move on with their lives.