<![CDATA[ <p style="text-align: justify;">FOR the past twelve years a group of Canadian golfers have been visiting Ardglass Golf Club as the jewel in the crown of the golfing trip to Northern Ireland. 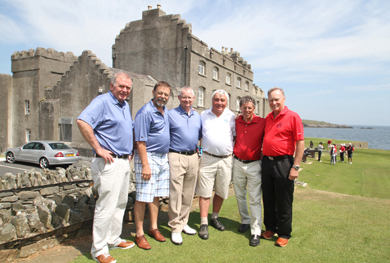 They play a weekend challenge match against ‘Ireland’ aka an Ardglass select team, and whoever wins or loses, they are all winners such is the camaraderie that has grown over the years between these golfers. The Canadians mainly come from the Ontario and Toronto area and they play four courses in the Causeway Coast but always relish their two days in Ardglass. The Ardglass players have made a few trips over to play on Canadian soil too over the years.

John Yates, a Canadian golfer who was one of the masterminds behind the golfing partnership, said: “We really enjoy coming to Ardglass every year as the hospitality is second to none and it is a tremendous golf course to play on whatever the weather. Our guys look forward to playing here every year and some have been coming for most of the twelve years. We have made great friends with the members at Ardglass.

“The Ardglass course is always challenging and you have to keep alert all of the time. It is a great course and the views of the sea from every hole are just brilliant. The weather  too has been first class – it was just like this when we left Toronto.”

PHOTOS FROM THE ARDGLASS-CANADA WEEKEND – click the link to view.

Twelve years ago, John Yates and his nephew Paul McDonald donated a range of national flags to the Ardglass club and to this day they are displayed through the summer season highlighting the club’s growing international status.

Ardglass Golf Club Captain Sean Murnin who played with the Canadian players said: “It is a great privilege to play with our Canadian friends as their golf etiquette and friendliness is second to none. Unbelievably they have returned each year and we make them very welcome. Regardless of who wins or loses the competition, it is always played in the most gentlemanly spirit.

“This year is was a very close cut result. Ardglass just managed to win by a point at 20½ to 19½ when our past president Willie Shaw won his hole on the fifteenth securing the game fro us. But is was a very enjoyable two days and the weather was just out of this world.”

After the Sunday afternoon match, the players had a meal and retired to the bar, and many looked well sun burned after their round.