Though the girls only had the bare 15 they were first on the attack with Frances O’Connor being the first to get a score on the board in the form of a point, shortly followed by another from Michelle Lavery. The Finn managed to get the ball into Brights half but between great defensive play from Roisin Torney, Angela O’Connor and Keara Paterson they were unable to get a score writes Ciara Sharvin. 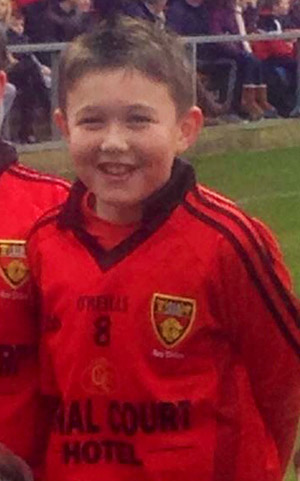 Lee Murphy who represented both his club and School (St Jospeh’s PS, KIllough) when he played at half time during Down’s league match[/caption]

Therese McCartan was back in nets after recovering from injury and was back on form making some great saves when the time called. Apart from a few attacks on the Bright defence the Finn were unable to deal with Brights Midfield Sarah Venney and Natasha Lavery along with the half forwards and full forward line. Brights ability to quickly move the ball saw Jenny Fitzsimons slip in a goal past the Finn keeper this was shortly followed by a goal from a penalty by Sarah Venney.

Bright scored another 4 points before the end of the first half leaving the score 2-6 to 0-0. The second half started with the Finn winning the throw in and from this getting their first score of the game in the form of a point, however Bright were soon on the attack with Frances O’Connor and Michelle Lavery again scoring a point each.

Jenny Fitzsimons also got herself another goal shortly after. The finn though never gave up and where soon putting pressure on the Bright defence scoring another few points, though they were denied any goals by yet more great defensive work from Angela O’Connor and Roisin Torney. Bright were able to bag another goal from Alisha Treacy who had a fantastic game being instrumental in setting up previous points. Another 3 points were scored by Bright ending the match with a score line of Bright 4-11 Aughlisnafin 0-4. Great result ladies, with some fantastic displays of teamwork.  The ladies would like to wish team mate Rachael Ranaghan all the very best with her performance in Ballykinler’s Strictly Come Dancing.

Last Sunday saw the start of the men’s league where Bright were away to Killyleagh. A low scoring first half kicked off with Corey Ranaghan being denied a goal by a Killyleagh defender. Kevin Groves put the first score on the board with a point from a free. Killyleagh went straight on the attack but a save from keeper Pearse McCarthy saw Bright take the ball back up the field resulting in Corey Ranaghan’s second point. Bright had a number of scoring opportunities with a few frees falling short of their target. Ryan Mageean added his name to the score sheet with a point.

Just before half time an injured Conor McAllister was replaced in midfield by keeper Pearse which saw Michael Farrand take up his usual position in nets. At half time the score was at an equal setting of 4 points each. The second half started with Killyleagh scoring first. Bright had a few shots for goal but these were denied by the oppositions keeper. It looked like Bright took their foot of the pedal for a while when it was 10 minutes before they scored. With both teams being awarded frees and scoring points from play it was point for point.

Bright picked up the pace in the last stages of the game and went on the attack again. Ryan Mageean tried for a goal but the Killyleagh keeper once again denied this, though fortunately for Bright the keepers luck eventually ran out and Nicky O’Connor was able to get the ball in the back of the net for the only goal of the match. The game ended 1-9 to 0-8 This was a hard fought match with Bright’s defence working hard and showing some great displays. Well done, great start to the season boys. Training continues Sunday at 2pm on the pitch and Thursday night at 7pm in the hall.

A big well done and congratulations to Lee Murphy who represented both the club and his school (Killough P.S.) when he played at half time during Down’s league match.  Lee is a big Danny Hughes fan and aspires to be as committed and successful as his idol.  You’re not far off it Lee, keep up the hard work. The Under 10, 12 & 14s start their training on Wednesday 26th March at 6pm on the pitch. All existing and new members welcome.

Bright have teamed up with Rossglass County FC to bring you “Fight Night” which will no doubt be a fantastic nights entertainment .  Details to follow.