<![CDATA[<strong>Coleraine 7  Ballynahinch Unted  0. EVER since the Irish Fifth Round draw in mid-December, everyone at Millbridge have been focused on 12 January 2013 when they would have visited the Danske Premiership team Coleraine. A score line of 7-0 while it is disappointing is no reflection of the experience that each and everyone associated with United enjoyed and that is exactly what they did writes Gilbert Cromie. Just before 3pm the two teams took to the field with United accompanied by a small army of youthful mascots. There was considerable excitement particularly amongst the visiting Ballynahinch United support which numbered in excess of 100 which was an outstanding turnout for a small amateur club. [caption id="attachment_35591" align="alignleft" width="400"] 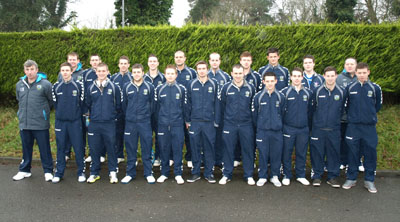 The Ballynahinch United team.[/caption] Very soon the referees whistle was blown and it was game on with United facing a full strength Coleraine. Such was the home team’s determination to progress in this competition, it was clear they were  not going to be the victims of a giant killing. From the outset the home Oran Kearney’s experienced team were on the attack spraying the ball across the pitch with precision. The most prominent player for the home team was Jamie Tomelty a new signing from Portadown. For all their possession Coleraine never really caused United any serious problems with their defence of Boal,Bowman, Hayes, Brashaw and Herron working their socks off supported by midfielders Carlisle, Hunter, Stuart McMullan and Cheevers. Brian McMullan’s handling was superb while he made a number of excellent saves in the first half particularly one from Curtis Allen which took a wicked deflection of Hayes and as it dipped under the bar he palmed it over the cross bar. United were not without their attacking opportunities with a Hunter free kick being against the Coleraine defensive wall and a Stuart McMullan shot flashing across the face of goal. Lone forward Ian McMullan worked tirelessly up front and received a fair degree of physical attention from the experienced Coleraine central defensive pairing of Beverland and Ogilvy. The half time whistle came and as both teams headed for the changing room United did so to a resounding chorus of cheers from their supporters while the Coleraine faithful were somewhat muted in their support fearing a potential upset might be on the cards. The opening exchanges of the second half were much the same as the first however in the 51st minute, everything changed when a delightful through ball was dummied by Allen and as it fell to strike to his partner Harkin he placed into Allen’s path and he slotted it into the net out of the reach of McMullan’s outstretched hand. In the 56th minute United found themselves 2-0 down and worse still a man down after Davy Boal was red carded for an off the ball tussle in the penalty area with McIlmoyle the Coleraine player escaping any punishment. Ruairi Harkin scored from the resulting penalty. [caption id="attachment_35592" align="alignright" width="400"] 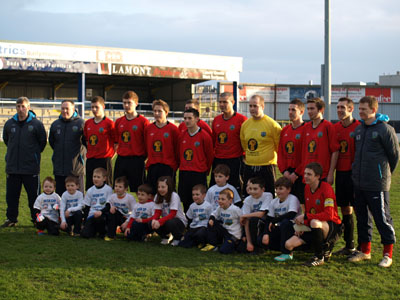 The Ballynahinch United team with their mascots.[/caption] Manager Colin Murray introduced substitute Jay Smyth for the injured Ian McMullan but with a man down it was to be one way traffic. During the remainder of the game Scott McKibbin replaced JJ Carlisle and McCauley Foster came on for Adam Herron. Heroic defensive displays by Hayes and Brashaw at the centre of a besieged United defence could not save the day even though Brian McMullan produced at least five world class saves. In the 65th minute United had legitimate claims for a penalty when a shot appeared to come of a Coleraine defender’s hand but the referee waived away the claims. Coleraine with the wind in their sails pressed home their superiority in every respect and they scored another five goals through Paul Owens, Stephen Lowry [2] the first of which was an absolute pile driver, another Ruairi Harkin penalty and Coleraine’s very own Stewart McMullan with his first ever competition goal. While United were probably glad to hear the final whistle they nevertheless had given a good account of themselves and their efforts were recognised by their fans with a standing ovation from both home and visiting fans. The Irish Cup adventure may be over but the important games are certainly not.  They face local rivals Temple Rangers at the Millbridge in the first round of the Clarence Cup. The kick off is at 1.30pm BUFC NOTES The committee and members of Ballynahinch United would like to express their thanks to the large numbers who travelled to Coleraine to support the team either by the supporters bus or other means. Special thanks go to Hannah Majury who looked after the supporters bus. On the day the team were resplendid in a new red and black strip which was very generously sponsored by NFU mutual. BEC Electrical and Bartley Murphy Construction supplied the new training tops while GML Electrical sponsored the tee shirts worn by the young mascots. The Ballynahinch Lions who are great supporters of local sport again came to the rescue this time providing a full medical kit while Mark Murnin of Paddy Kelly’s provided generous sponsorship to cover other sports gear which ensured that the team were well turned out. Additional sponsorship for match balls was provided by Charles Newsagents, Morrisons   Vivoxtra, Down Satellite Aerial Services and the Rowallane Neighbourhood Team PSNI. Special tanks to Lorraine McMullan for her help in securing funding for the club. Many thanks also goes to club man Shaun Bonner who as well as running the club website was responsible for creating a massive amount of interest through the social media specifically Twitter. Any local businesses who would like to advertise on the club website www.ballynahinchunited.com and take advantage of the wide coverage that Shaun has garnered should contact the club for more details. On the day of the match he was in the Coleraine Press Box along with the local media including the BBC Radio Ulster presenter Alan Simpson providing a blow by blow account of the match to those who were unable to be present. On the day Club Treasurer Johnny McGreevy took some real quality photographs which can be viewed on the club website. The officers, directors and supporters of Coleraine FC were outstanding hosts throughout the day and they complimented the performance of the team and the way in which its management team had organised them. They also paid glowing tributes to the professionalism of the club and its committee and made particular mention of the large support that had come along which was considerably more than what many Premier League teams brought with them. At an informal function in the Coleraine Board Room BUFC Club Chairman Gilbert Cromie thanked everyone associated with the Coleraine Club for their cooperation and assistance in the run up to and on the day of the match. Robert Creighton, one of the club’s most loyal of supporters, was the recipient of a signed Coleriane shirt courtesy of Coleraine Club President Andy Magowan, a Ballynahinch man born and bred who’s loyalties on the day were definitely split. Ballynahinch United memories of their trip to Coleraine will live long but it also gives everyone a thirst for more glory in the future.]]>